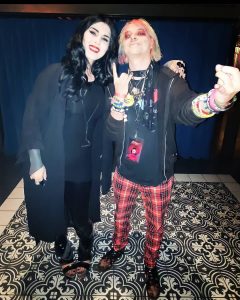 A group of friends and I are waiting to get into The Van Buren. The Van Buren is Phoenix’s newest 1800 capacity concert venue – converted from a historic vintage auto-dealership located in the heart of Downtown Phoenix. The only reason we are out here counting seconds is to meet Kat Von D at her first-ever tour as a musician. Well-known tattoo artist turned singer Kat Von D has announced upcoming U.S. tour dates for the fall in support of her debut album titled Love Made Me Do It. The tour dates will be supported by electronic rock duo Prayers. We were waiting as time flew by for the meet and greet.  Fans and I walked up to her as she stood in the lobby area. Usually, most artists meet and greet you by the stage or at the back of the venue or the backstage area, or sometimes the green room. Kat Von D was very kind and nice while signing autographs and giving hugs to awaiting fans.  She was wearing all black with red lipstick of course. I started to get a little nervous as it was my turn to meet her. I am wearing red checkered jeans, flora shoes, and a Beatles rainbow shirt with band bracelets around my wrist, with pink and red eyeshadow around my eyes. I was thrilled she liked the custom posters, I created for her, she autographed them for me.  Then she told me she was amazed by my eye makeup, I was flattered.  It was a real honor meeting Kat Von D, I’m a huge fan. It makes me think about the reason I make custom posters. I love to frame them on my wall, like the way musicians frame platinum records. Maybe one day I will have a Platinum plaque as well. Or like how sports athletes put trophies on their walls or how some rockstars have a Grammy or Oscar on their bookshelf. But anyway, back to the great Kat Von D, who Is not like all celebrities, she comes off as more like a next-door neighbor or a friend instead.  It was amazing seeing all the fan’s faces just so happy to meet her. Kat von D live show is like a  vaporwave goth Burlesque pole dancing show full of mystic lights and dances like a ballet ballroom mixed with a Goth club feel with tons of theatrics and lights and LCD video display.  Take a minute Check out her makeup line and get an appointment tattooed by her. Though She is moving to Indiana, due to Closing down her LA shop financially “it was too much money to live there”, she said.

Kat Von D is
Mexican-American tattoo artist, model, entrepreneur, and recording artist. She is best known for her work as a tattoo artist on the TLC reality television show LA Ink. She owns a tattoo  shop called High Voltage which she is closing down and moving to Indian at end of the year
The home is known as the Schenck Mansion, located in Vevay, Indiana. She will  live in it with her kids and husband Rafael Reyes (born August 2, 1975), also credited as Leafar Seyer lead singer of Prayers, American author, artist, and musician credited with creating the Cholo goth genre of music

– Check out her debut album Love Made Me Do it. Check out her new single Fear You that delivers Gothic vocals mixed with nine-inch nails / Duran, Duran instrumental. 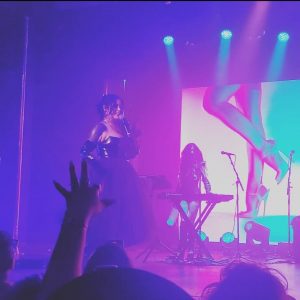 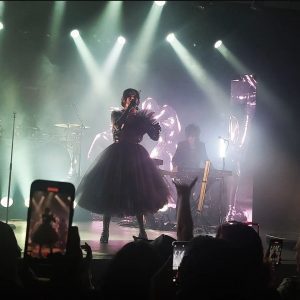 Check the videos here for the interview