Bueckers injured her knee in a pickup basketball game, according to the school’s release, and an MRI later that evening confirmed the ACL tear. The release did not say where the junior guard from Hopkins, Minnesota, was playing when the injury occurred. It was the same knee she injured last year, causing her to miss significant time.

She will undergo surgery Friday at UConn Health in Farmington, Connecticut. An update on her recovery timetable will be made available after the procedure.

In a statement posted on her Instagram account, Bueckers said she is leaning on her faith to move forward.

“It’s so so crazy because you work so hard to get back healthy, you feel stronger than ever, and you are playing your best basketball and with one sudden movement it all shifts,” Bueckers wrote. “It’s hard trying to make sense of it all now but I can’t help but think that God is using me as a testimony as to how much you can overcome with Him by your side. Some little kid that just tore their ACL or had a major surgery might need this story … because it’s going to be one hell of a comeback.”

She added, “The prayers and love means so much to me and the doubts that I won’t get back to where I was might mean even more. God put a dream in my heart and even if I have to walk through a nightmare to get it I’m going to keep believing.”

Bueckers was the 2020-21 consensus national player of the year, becoming the first freshman to earn that honor and helping UConn reach the women’s Final Four. She averaged 20.1 points, 5.9 assists and 2.3 steals per game that season.

Bueckers missed 19 games last season after suffering a left-knee tibial plateau fracture and torn meniscus in early December but returned to help lead the Huskies to the national championship game, where they lost to South Carolina. She finished the season averaging 14.6 points, 4.0 rebounds and 3.9 assists per game. 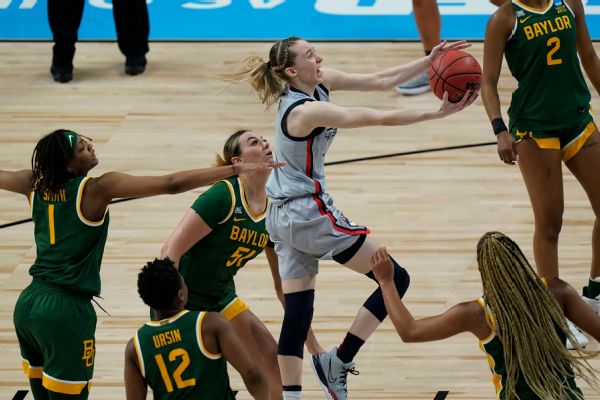 What Paige Bueckers accomplished as a freshman, before she missed 19 games during her sophomore season with a knee injury:
• First freshman to win AP Player of the Year
• AP All-American Honors (1st Team)
• Naismith Trophy & Wooden Award winner
• Big East POY & Freshman of the Year
• 3rd-most points scored by a freshman (109) in a single NCAA tournament — Tamika Catchings (111 in 1998) & Cheryl Miller (109 in 1983)

“We’re all devastated for Paige,” UConn coach Geno Auriemma said in a statement. “She’s worked really hard to get stronger and healthier this offseason, and this is an unfortunate setback. Paige is obviously an amazing basketball player, but she’s a better person and teammate and it’s really unfortunate that this has happened to her.

“We’ll miss her presence on the court, but she’ll do everything she can to still lead and help her teammates this season. Our program will support Paige through her healing process to help her come back better and stronger.”

UConn lost its top two scorers in Christyn Williams and Evina Westbrook, and now without Bueckers in the lineup for the upcoming season, it will have lost 52% of its scoring output, according to ESPN Stats & Information research. The Huskies’ leading returning scorers are Azzi Fudd and Caroline Ducharme, who also underwent left hip surgery in April.

UConn also has two of the top five incoming recruits in Ayanna Patterson (No. 4) and Isuneh Brady (No. 5), according to HoopGurlz.

Information from The Associated Press was included in this report.