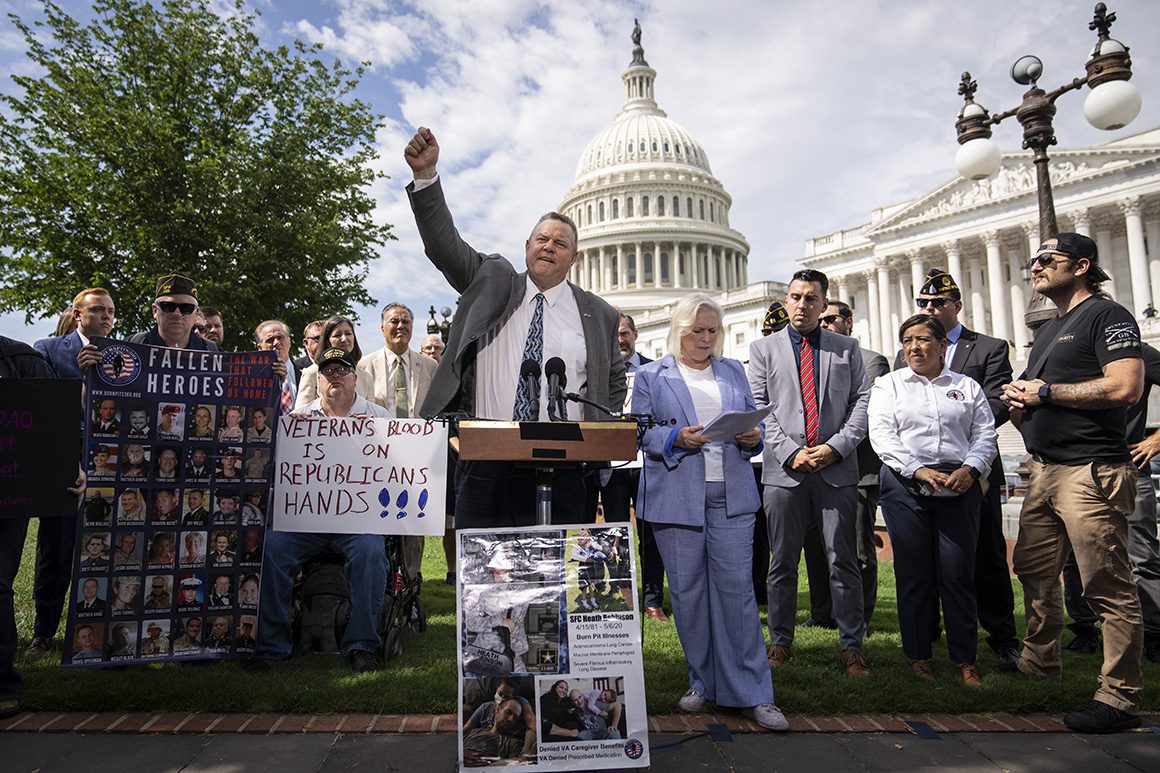 The Senate on Tuesday passed a sweeping expansion of veterans health care, sending it to President Joe Biden’s desk after GOP resistance held up the bill last week.

Lawmakers voted 86-11 to back the measure, which caps a yearslong quest to help veterans who were exposed to substances like Agent Orange and toxins from burn pits while on active duty. Republicans quickly fell in line behind the bill — after blocking it less than a week ago — after Majority Leader Chuck Schumer allowed three GOP amendment votes, all of which failed on the floor.

“Our veterans across America can breathe a sigh of relief. …This is good news,” Schumer said Tuesday.

The legislation extends health benefits to some 3.5 million veterans, many of whom say they’ve come down with cancers, respiratory disease and other illnesses after being exposed to hazardous chemicals during their military service. Another provision in the bill extends federal health care coverage to 23 illnesses.

“This bill is the legislation we envisioned when we set out to right wrongs of our toxic-exposed veterans. The PACT Act recognizes that responsibility and it recognizes the cost of war,” said Sen. Jon Tester (D-Mont.).

Democrats and veterans’ advocates, like comedian Jon Stewart, hammered Republicans for holding up passage of the legislation late last week. The roadblock came weeks after a nearly identical version of the bill passed the Senate — and hours after Schumer and Sen. Joe Manchin (D-W.Va.) announced an agreement on a party-line climate, tax and health care bill, angering GOP senators who thought the package would be narrower.

So when Republicans blocked the unrelated veterans bill shortly after that deal was announced, Democrats quickly accused them of retaliation given they’d helped pass the toxic substances legislation in an 84-14 vote in June.

GOP senators denied that was the reason, instead pointing to criticisms from Sen. Pat Toomey (R-Pa.), who argued a “budgetary gimmick” in the bill could allow certain funds to be used for programs unrelated to veterans’ health care. That same language was in the bill when it passed the chamber in June.

By the time senators returned to D.C. on Monday, after days of backlash, GOP leadership was promising the legislation would pass quickly. But Republicans sought to downplay the delay Tuesday, even as they approved the same legislation they had blocked last week.

“Look, these kinds of back-and-forths happen all the time in the legislative process, you’ve observed that over the years,” Minority Leader Mitch McConnell said. “I think, in the end, the veterans service organizations will be pleased with the final result.”

The Senate still descended into an intense blame game over the delay. Haggling over amendment votes dragged into Tuesday as senators barreled through an intense to-do list they’re trying to complete before leaving for an extended August recess.

Toomey had insisted that his amendment only require a simple majority to pass rather than a 60-vote threshold. The Republican was still asserting that position just hours before Schumer announced the two parties had reached a deal and defended his push even as he ultimately relented on Tuesday.

“We are witnessing a very old Washington trick playing out on what might be an unprecedented scale,” Toomey said. “You take this sympathetic group, craft legislation to address their problems, and then sneak in something that’s completely unrelated that could never pass on its own.”

In the end, Toomey’s amendment failed, along with two others proposed by GOP Sens. Rand Paul (Ky.) and Marsha Blackburn (Tenn.). Paul’s would have helped pay for the bill by reducing aid to other countries, and Blackburn’s would have expanded certain coverage under community care programs.

Biden has championed the legislation and previously indicated he believes his late son, Beau, may have contracted his brain cancer from burn pits used during the Iraq War.

Veterans and advocates, like Stewart, lined the upper rungs of the chamber quietly watching Tuesday evening as votes on the bill dragged on for more than two hours. Schumer at one point looked up at Stewart, who was in the third row of the gallery, and quipped “we’re waiting on two people.” After the vote officially passed, Stewart smiled and shook hands with those surrounding him in the chamber, while a lone person cheered.

Many of those advocates and veterans had camped outside the Capitol the past few days to demand Republicans immediately pass the measure. Biden, who was isolating due to a positive Covid diagnosis, had over the weekend connected with the veterans over FaceTime and sent them pizza.