Candace Owens has made her feelings about Juneteenth becoming a national holiday known — she’s not a fan of it. 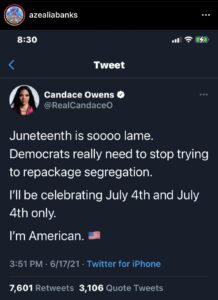 Azealia Banks has had enough of Owen’s complaining:

“According to this logic, on July 4th 1776 you would still be enslaved, most likely on the verge of starvation due to all of America’s food supply having been prioritized for the war,” she began. While you hand sew American flags and struggle to wet nurse some depressed 24year old white widows sickly child until your nipples are chapped and dry whereafter you will be whipped by her 80 year old uncle for your own malnourishment and inability to produce milk, then sent to toil over a wood burning stove- blistering your hands while forced to make a peasantly meal of biscuits and gravy.”

Juneteenth, also known as Freedom Day or Emancipation Day, is the oldest celebration of African American freedom. It is already officially recognized by almost every state in the union. On Thursday, President Joe Biden signed a bill making the day a federal holiday.

“You will be watched closely by her irate, sunburned and whisky soaked 80 year old uncle to be sure you do not sneak a single biscuit or fingerfull of roux to yourself. after you’ve watched everyone eat, you will be sent to do the cleaning up. Your last task will be brushing the stressed and balding white widows hair to prepare for her sleeping bonnet, a deep rest in her comfortable canopy bed. Next your final descent down the stairs and out the back door where you proudly sleep on a bed bug infested pile of hay in a 6×4 cabin you share with 4 other slaves. Happy Independence.”

Banks is usually on the receiving end of harsh criticism on social media, but pretty much everybody was in support of her epic dragging of the Conservative pundit.