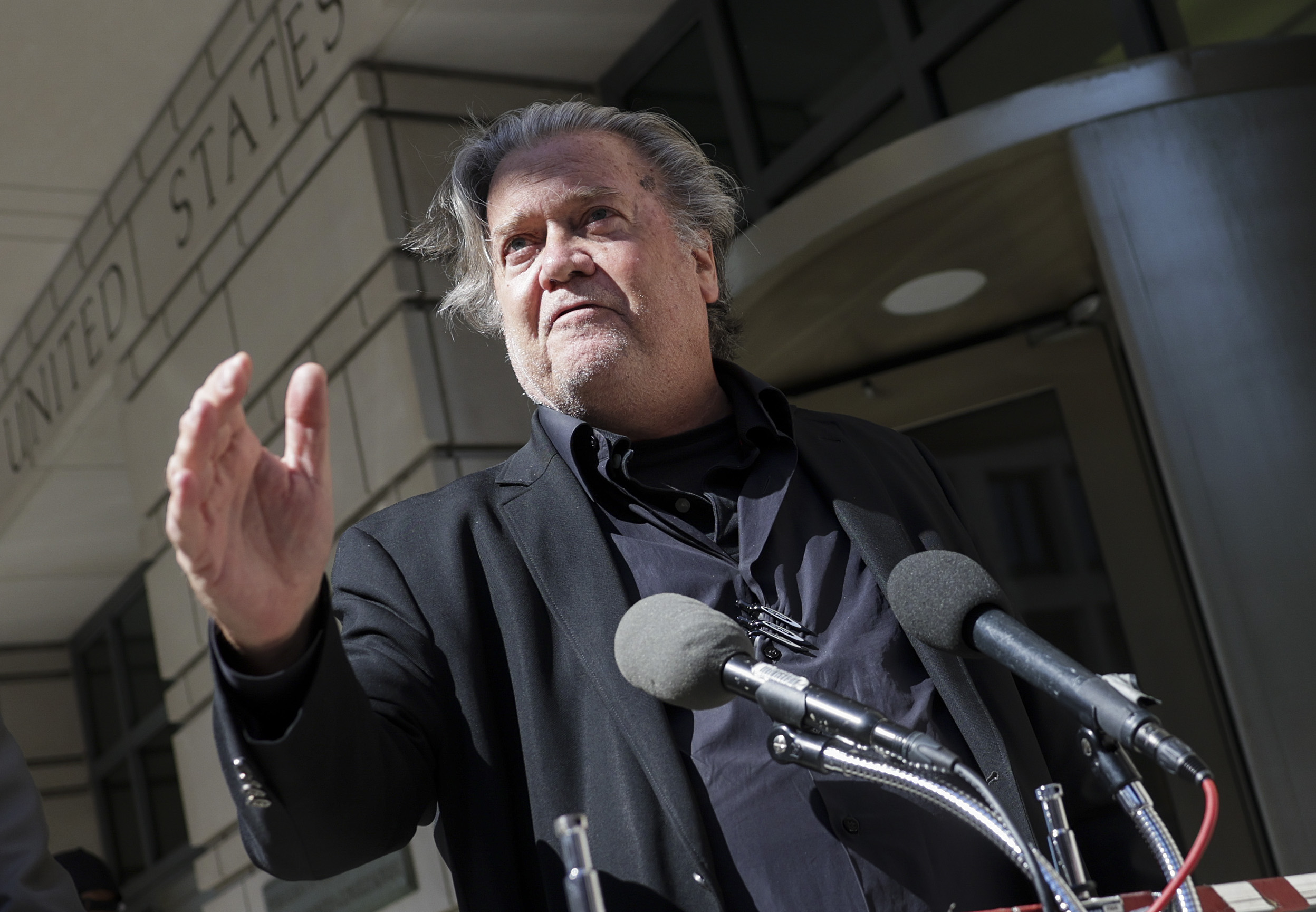 Former Trump White House adviser Steve Bannon is asking that his criminal trial for contempt of Congress be delayed because the committee he’s accused of defying, the House Jan. 6 panel, is generating too much publicity through its high-profile public hearings.

Bannon’s trial on two misdemeanor charges for failing to comply with a House subpoena was set to open July 18, but his attorneys said in a court filing Wednesday that the trial should be put off until at least October because ongoing attention to the House hearings could taint the jury.

“Select Committee members have made inflammatory remarks about the culpability of President Trump and his closest advisers, including Mr. Bannon, and have broadcast to millions of people their purported ‘findings’ on issues that may prejudice the minds of jurors in this case,” Bannon attorneys Evan Corcoran, David Schoen and Robert Costello wrote.

“Those broadcasts have been repackaged and re-broadcast in countless forms, creating a saturation of the information sources available to Washington, D.C. residents. Under the circumstances, a continuance is warranted — to allow the effects of the Select Committee hearing coverage a chance to subside,” the defense lawyers wrote in their motion filed with U.S. District Court Judge Carl Nichols.

The select committee has highlighted Bannon’s involvement in a “war room” that Trump allies established at the Willard Hotel in downtown Washington, D.C., where they helped direct Trump’s final failed effort to subvert the results of the 2020 election. They also played a clip of an episode of Bannon’s podcast, aired in the weeks before Jan. 6, in which he called for a protest at the home of a state legislative leader in Pennsylvania.

Bannon defied a September 2021 subpoena from the select committee to appear and provide documents, and the House formally referred Bannon to the Justice Department the following month. Within three weeks, prosecutors had charged Bannon for his refusal to cooperate. Bannon has contended that he was immune from the committee’s subpoena because of his contacts with Trump in the pre-Jan. 6 period. DOJ has sharply rejected that contention.

Bannon’s filing revives an ongoing tension between the select committee’s urgency to make its findings public and the Justice Department’s efforts to advance high-profile criminal cases connected to Jan. 6.

Bannon’s team highlighted that the DOJ recently agreed to a four month delay in the seditious conspiracy trial of five leaders of the Proud Boys, citing the “prejudice” created by the select committee’s hearings. Judge Tim Kelly, who is presiding over that case, agreed. But in a separate Jan. 6 case, Judge Beryl Howell rejected a delay requested by defendant Anthony Williams, who also cited the public hearings. Williams, she noted, was not a high-profile defendant and was not featured by name the way Proud Boys leaders were.

The select committee is in the midst of a series of public hearings that began June 9 and were expected to wrap at the end of the month but now are poised to continue into mid-July, around the time Bannon’s trial is set to begin. The committee is also considering the release of more than 1,000 witness interview transcripts connected to its investigation, and Justice Department officials — who have tried and failed to obtain the transcripts since April — say they anticipate the transcript release coming in September.

A spokesperson for prosecutors in Bannon’s case declined comment, but in prior court hearings, prosecutors have underscored the importance of proceeding quickly with the case in order to establish the legal necessity of complying with congressional subpoenas.

Bannon’s defense argues in the new motion that moving the case to trial about eight months after indictment was “aggressive” to begin with, but that the planned July trial was set without knowing that the House committee’s public hearings would be in full swing.

“When trial was scheduled,neither the Court nor the parties were aware of the June and upcoming July media blitz by the Select Committee,” Bannon’s defense team wrote, repeatedly noting that the House panel hired a former TV executive to help package the panel’s televised sessions. “The media saturation in June and the upcoming hearings in July — right before trial — warrants a continuance.”