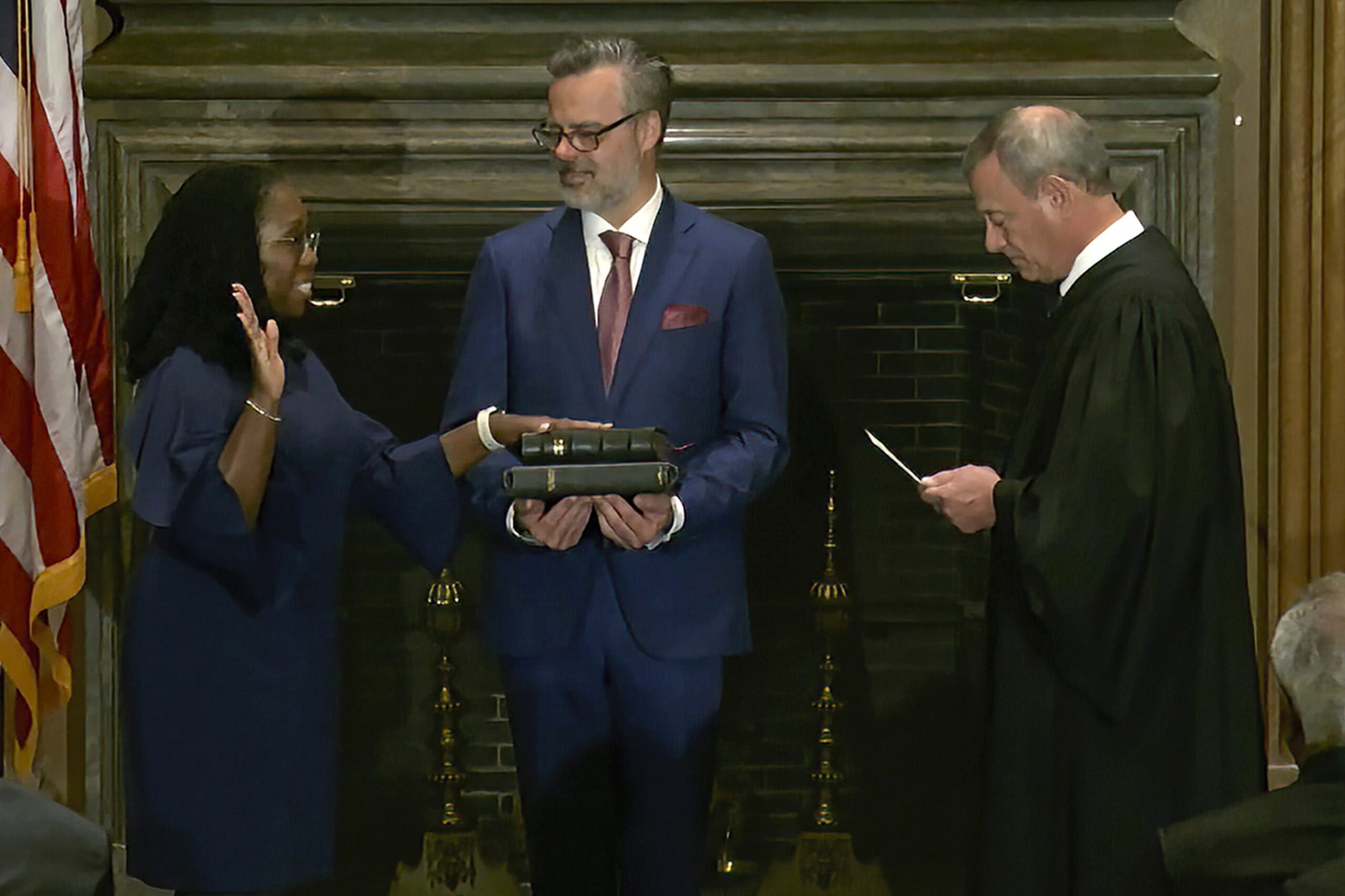 In this image from video provided by the Supreme Court, Chief Justice of the United States John Roberts administers the Constitutional Oath to Ketanji Brown Jackson as her husband Patrick Jackson holds the Bible at the Supreme Court in Washington, Thursday, June 30, 2022. (Supreme Court via AP) | AP

Supreme Court Justice Ketanji Brown Jackson was sworn in on Thursday, the culmination of her historic ascension as the first black woman to claim a seat on the nation’s highest court.

“I am truly grateful to be part of the promise of our great Nation. I extend my sincerest thanks to all of my new colleagues for their warm and gracious welcome,” Jackson said in a statement, in which she also thanked Chief Justice John Roberts and now-retired Justice Stephen Breyer.

Jackson was sworn in by Roberts, who administered the constitutional oath, and now-retired Justice Stephen Breyer, the justice for whom Jackson once clerked and whose seat on the bench she has taken over. Jackson, nominated last February by President Joe Biden to replace Breyer, was confirmed by the Senate with on a 53-47 vote in April.

“I am glad for America,” Breyer, a 1994 appointee of President Bill Clinton, wrote in a statement congratulating Jackson. “Ketanji will interpret the law wisely and fairly, helping that law to work better for the American people.”

The newest associate justice assumes her role in the wake of a string of high-profile, controversial decisions issued by the court, including one ruling that dismantled federal abortion rights and another that struck down a New York law that limited carrying firearms outside the home.

Jackson’s placement on the court will have no impact on its ideological tilt. Justices appointed by Republican president still outnumber their Democrat-appointed colleagues by a 6-3 margin.

Her ceremony Thursday was small and brief, attended by a small group that included her husband and daughters. A larger formal ceremony, or investiture, is expected at a later date.

Jackson’s oaths allow her to begin her judicial duties, Roberts said during the ceremony. “She’s been anxious to get to them without any further delay,” the chief justice said.