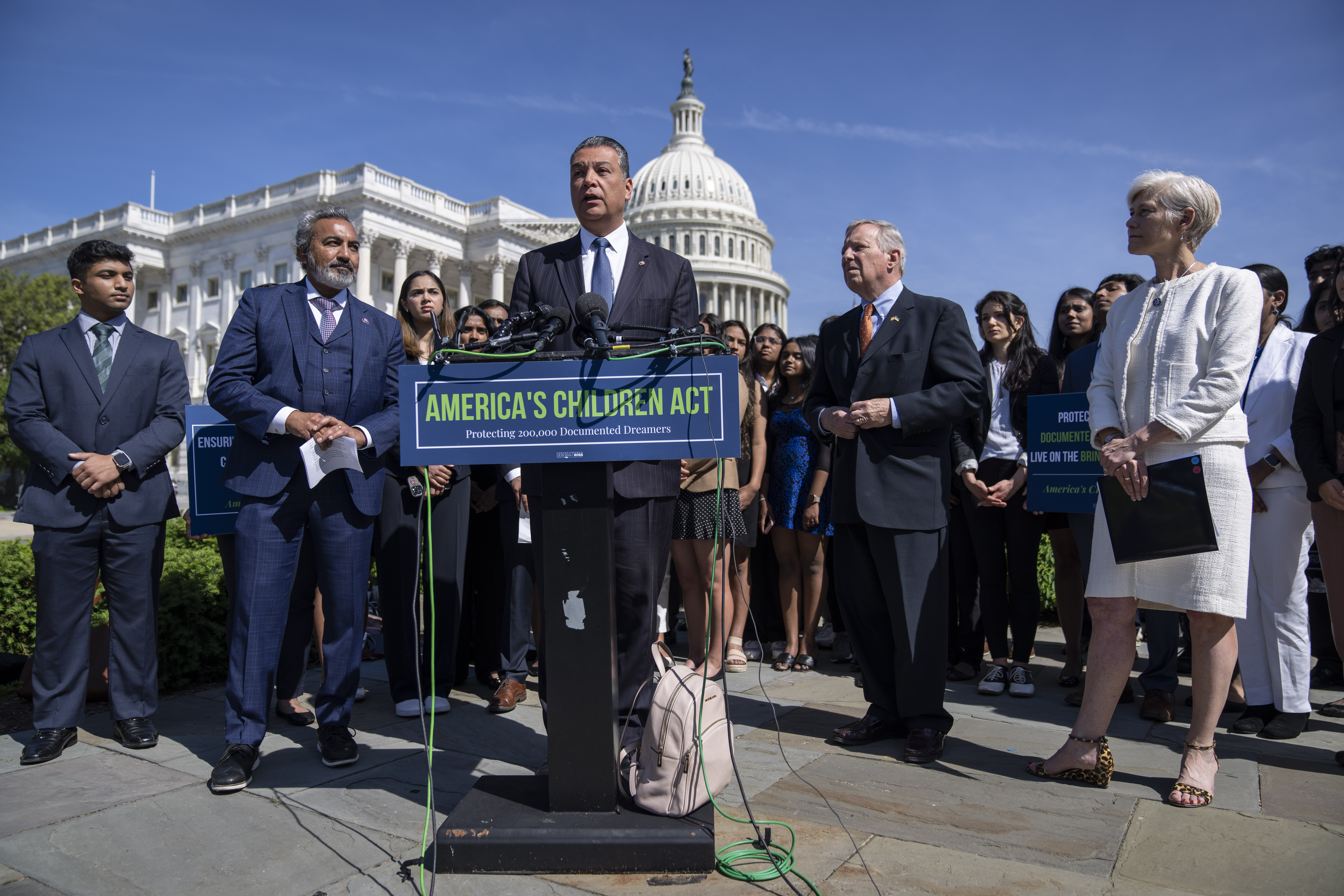 Sen. Alex Padilla (D-Calif.) speaks during a news conference calling for bipartisan legislation to protect Dreamers outside the U.S. Capitol on May 18, 2022. | Drew Angerer/Getty Images

A panel of federal judges in New Orleans on Wednesday appeared unconvinced by the Justice Department’s arguments defending the legality of the Deferred Action for Childhood Arrivals program, with the fate of nearly 600,000 so-called Dreamers hanging in the balance.

The three-judge panel is hearing appeals by the Biden administration, liberal states and individual DACA recipients to U.S. District Court Judge Andrew Hanen’s decision a year ago that held DACA to be unlawful. Hanen’s 2021 ruling ordered the Department of Homeland Security to no longer approve new applicants to the program, which grants work permits and protection from deportation to young undocumented immigrants brought to the U.S. as children. However, the order allowed DHS to continue to process DACA renewals as the issue moved through the courts.

Wednesday’s arguments before the 5th Circuit Court of Appeals took place just over a decade after President Barack Obama created the DACA program through executive action. Much of the roughly 45-minute argument session was devoted to whether Texas and other states suing to block the program could show enough impact on them to proceed with the court case.

“The relevant question here for summary judgment is whether… [Texas] has shown at least a dollar of expenditures that would be remedied by the removal of DACA, and whether some individual who has received that sort of spending under DACA will leave the United States,” Texas Solicitor General Judd Stone II told the judges.

Stone argued that Texas did have injury from the DACA program, citing research from economist Ray Perryman that DACA recipients cost the state about $250 million per year. Perryman told The Dallas Morning News in August 2019 that the statement was “a complete mischaracterization of my research.”

DOJ attorney Brian M. Boynton, meanwhile, argued that the plaintiff states did not have standing to challenge the federal government’s deferred-action policy because their injury was “purely speculative,” citing a 2015 case heard in the same appeals court.

The panel assigned to the case, Judges Priscilla Richman, James Ho and Kurt Engelhardt, are a relatively conservative set of jurists on an appeals court widely considered to be the most conservative such bench in the country.

Ho, an appointee of former President Donald Trump, vigorously challenged Boynton during his argument, questioning why the 2015 case, which was central to his argument, wasn’t mentioned in the Justice Department’s written filings. “I’m looking at your brief, and you don’t really talk about that case,” Ho said. “I’m just surprised that your lead case isn’t even in your brief.”

Boynton also tried to persuade the judges that if they’re inclined to strike down the program, returning the issue to the Department of Homeland Security for them to revise the policy while keeping it in place would be an “appropriate remedy” in this case.

The appeals court panel is expected to rule on the case in the coming months, with the losing side virtually certain to seek further review by the full bench of the 5th Circuit and eventually at the Supreme Court.

Conservative states never mounted a serious court challenge to the DACA program after Obama announced it in 2012, waiting to make a concerted legal attack on the program only after he sought to expand it in 2014. Hanen blocked that expansion and the Supreme Court in 2016, by 4-4 vote, left that block in place.

Trump declared that DACA was illegal and sought to end it after he took office, while insisting that those efforts were part of moves toward a broader deal with Congress on immigration. Lower courts blocked Trump’s attempt to rescind the program. In a surprise 5-4 decision in 2020, the Supreme Court voided Trump’s effort to wind down DACA, declaring that officials failed to take account of all the relevant factors in making the decision to end it.

The Biden administration is working on a new regulation to address the status of DACA recipients and perhaps others not covered by the current program, but the status of that proposal is unclear.

Josh Gerstein contributed to this report.