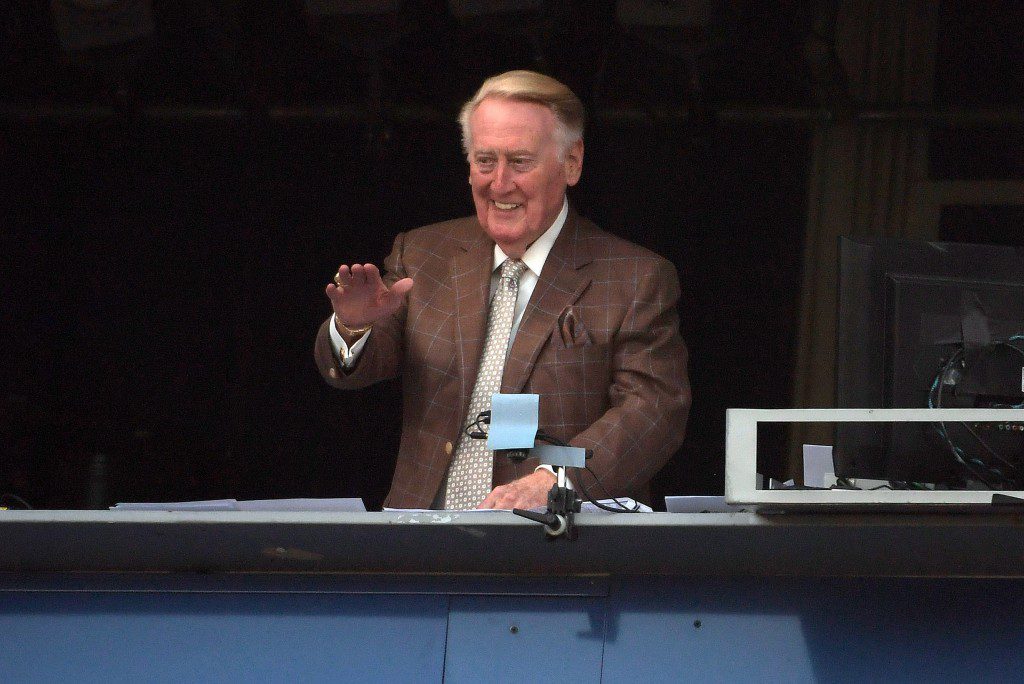 Broadcasting legend Vin Scully passed away today at age 94, according to a Dodgers news release.  “He was the voice of the Dodgers, and so much more. He was their conscience, their poet laureate, capturing their beauty and chronicling their glory from Jackie Robinson to Sandy Koufax, Kirk Gibson to Clayton Kershaw.  Vin Scully was the heartbeat of the Dodgers – and in so many ways, the heartbeat of all of Los Angeles,” the release stated.

For all of the legendary voices who have called baseball games over the decades, there is little debate that Scully was the best of them all, both for the incredible length of his tenure in the booth, and his unmatched quality over those 66 years of broadcasting Dodgers games.  Amazingly, Scully was already a Hall-of-Fame level broadcaster even aside from his work with the Dodgers, as he covered the NFL, pro golf, tennis, and (naturally) postseason and All-Star baseball games for such outlets as CBS, NBC, ABC, and TBS.

From start to finish in his iconic career, Scully was a master storyteller, finding endless inventive and poetic ways to call the action, yet never overwhelmed the play on the field.  Scully was on the mic for many of the greatest moments in baseball history, adding to those moments with both wonderful calls and (just as important) poignant silences.

Scully was something of a prodigy, as quite early in his career he began calling Dodgers games in Brooklyn in 1950 on both TV and radio broadcasts.  He was then in the booth until the end of the 2016 season, following the Dodgers to Los Angeles.  As noted in the press release, “it was Vin as much as anyone who bonded the franchise with its new city.  Fans – not only around the city, but at the games themselves in the Los Angeles Memorial Coliseum – would listen on their new transistor radios to Vin and colleague Jerry Doggett.”

On behalf of all of us at MLBTR, we send our condolences to Vin Scully’s family and legions of friends and fans.