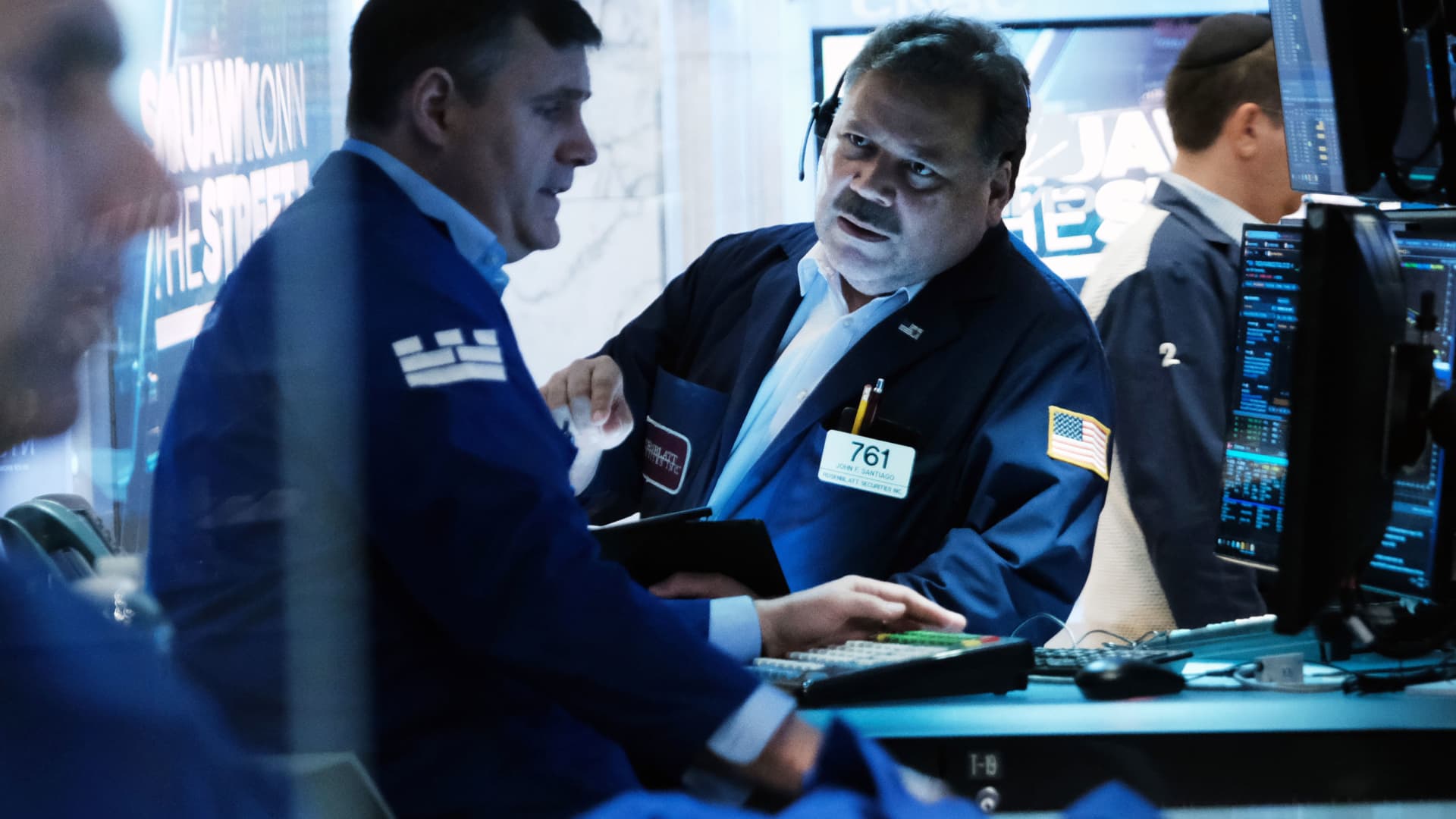 Stocks fell Friday in a volatile trading session after the July jobs report was much better than expected, as investors assessed what a strong labor market would mean for the Federal Reserve’s rate tightening campaign.

The Dow Jones Industrial Average shed 135 points or 0.42%.The S&P 500 fell 0.80% and the Nasdaq Composite was down 1.34%. Losses were offset by bank stocks, which rose on hopes that interest rate hikes will continue at a solid clip. Energy stocks also gained, but technology companies slumped.

The labor market added 528,000 jobs in July, easily beating a Dow Jones estimate of a 258,000 increase. The unemployment rate ticked down to 3.5%, below the 3.6% estimate. Wage growth also rose more than estimated, up 0.5% for the month and 5.2% higher than a year ago, signaling that high inflation is likely still a problem.

Stocks opened lower following the report, even as it seemed to indicate the economy was not currently in a recession. Job growth was expected to slow as the Fed continues to hike interest rates to tame inflation, but this report shows a labor market still running hot. That means the central bank may act more aggressively at its next meeting.

“Anybody that jumped on the ‘Fed is going to pivot next year and start cutting rates’ is going to have to get off at the next station, because that’s not in the cards,” said Art Hogan, chief market strategist at B. Riley Financial. “It is clearly a situation where the economy is not screeching or heading into a recession here and now.”

The report is a crucial one as it’s one of two the central bank will see before it decides how much to raise rates at its September meeting. The Fed will have another jobs report and two more consumer price index numbers to weigh before it makes its next rate decision.

Major averages posted their best month since 2020 in July on the hope the Fed would slow the pace of its hikes. The S&P 500 added 9.1% last month.

Shares of Global Blood Therapeutics jumped nearly 10% Friday after the Wall Street Journal reported that Pfizer is in advanced talks to buy the company for roughly $5 billion. The company makes a drug for sickle-cell disease which was approved in December.

The stock was halted for trading due to the surge.

The S&P 500 is about to test the market’s bear case, BTIG says

The S&P 500’s bear case could be tested soon, if it closes above a certain level, according to BTIG technical analyst Jonathan Krinsky.

Investors have been debating for weeks whether up moves in the market are the result of a temporary bounce or a more lasting bottom. The three major averages just came off their best month since 2020, but there’s been so much pain in the market this year that many people are hesitant to believe the worst is behind them.

If the index hits that key level, “we would have to assume that June was the low for this cycle,” Krinsky said.

Shares of Lyft surged more than 14% Friday after the ride-hailing service posted better-than-expected earnings results Thursday. The company posted an unexpected quarterly profit, and saw ridership numbers jump back to levels not seen since before the pandemic.

The dollar rallied against a basket of currencies Friday on the back of that jobs report that crushed analyst expectations.

Stocks off lows of the day

Stocks clawed back some of their earlier losses after digesting the better-than-expected July jobs report.

The Dow Jones Industrial Average wavered, fighting to go positive. The S&P 500 and the Nasdaq Composite were down 0.03% and 0.11%, respectively.

While the report signaled that the Federal Reserve will likely continue to raise interest rates aggressively, it also showed that the U.S. economy is not in a recession as the labor market continues to maintain its strength.

A rate rebound is generally positive for banks, as is the U.S. avoiding a recession.

Bank of America economists added another quarter point of a rate hike into their forecast for Federal Reserve rate hikes this year, after July’s strong jobs report.

A basis point equals 0.01 of a percentage point. The Federal Reserve raised the fed funds target rate by 75 basis points in both June and July.

The fed funds futures market is also pricing in a 75 basis point hike for September, following the report that 528,000 jobs were added in July, more than double what was expected.

The much-stronger-than-expected July jobs report caught markets by surprise and has Fed watchers ratcheting up expectations for rate hikes.

The economy added 528,000 jobs in July, more than double expectations. Fed funds futures for October are now pricing in a 72% chance of a 75 basis point hike in September, up from 18% Thursday, according to Peter Boockvar, chief investment officer of Bleakley Advisory Group. (a basis point is 0.01 of a percentage point)

Boockvar said the market is also pricing out some of the rate cutting it expected for next year, and the June, 2023 futures were higher by 25 basis points, putting expectations for Fed funds at 3.54%.

“This is hot. For the Fed, this is another 75 basis point hike,” said Diane Swonk, chief economist at KPMG. She said the September rate hike could be 75 basis points now not 50 , based on the jobs report alone.”The Fed is dealing with strong demand in a supply constrained economy, and that demand extends to labor,” said Swonk.

Stocks down at market open

The stronger-than-expected July jobs report means that the Federal Reserve will likely raise interest rates by three-quarters of a percentage point at its next meeting, as opposed to the half-percentage-point hike markets expected, Seema Shah, chief global strategist at Principal Global Investors, said.

“Today’s blow out number means that a 75bps hike in September is almost a done deal. Not only is the labor market undoubtedly still tight, but wage growth is uncomfortably strong,” Shah wrote in a Friday note. “The Fed has its work cut out for it to create sufficient slack that could ease price pressures.”

“All the jobs lost during the pandemic have now been regained. But while that is positive news, markets will take today’s number as a timely reminder that there is significantly more Fed hiking still to come,” she said. “Rates are going above 4% – today’s number should put to bed any doubters.”

Cramer on why stocks reacting negatively to jobs report

“This number is extraordinary. We’re a growth country. The rest of the world is not,” said Jim Cramer on CNBC’s “Squawk Box” after the strong report.

But Cramer cautioned about what it means for stock prices and explained why we are seeing the negative reaction in the futures.

“It means that obviously when they (the Fed) come back it stays hot they will do another three-quarters,” Cramer said. “That’s not what we thought. Remember we kind of bought this market on the idea that they are at 50 (basis points).”

After increasing rates by 0.75 percentage point for a second straight time last week, the central bank will next meet to decide on interest rates in September. Traders hoped they would slow the pace to a half point hike at that meeting. The S&P 500 is up 8% in the past one month through Thursday’s close.

The U.S. economy added many more jobs than was expected last month. On Friday, the U.S. government said 528,000 jobs were added in July, easily beating a Dow Jones estimate of 258,000.

To be sure, average hourly earnings were up 5.2% year over year — well above expectations. This could be seen by the market as a sign that inflationary pressures remain strong.

“The past two years have been an absolutely nightmare of supply chain disruptions, one thing after another, and we are not out of it yet,” Tesla CEO Elon Musk said.
Patrick T. Fallon | Reuters

Elon Musk said that he thinks we are past peak inflation, and predicts a mild, 18-month recession ahead.

“We do get a fair bit of insight into where prices of things are going over time because when you’re making millions of cars, you have to purchase commodities many months in advance of when they’re needed,” he said.

Amazon will acquire iRobot for $61.00 per share, the consumer robot company announced on Friday. The all-cash transaction is valued at approximately $1.7 billion, including iRobot’s net debt.

A delivery person for Doordash rides his bike in the rain during the coronavirus disease (COVID-19) pandemic in the Manhattan borough of New York City, New York, U.S., November 13, 2020.
Carlo Allegri | Reuters

Shares of DoorDash were up more than 10% in premarket trading Friday after the company reported quarterly results that beat expectations after market close Thursday. The food delivery service said orders grew 23% on the year last quarter, and revenue surged 30%.

The company does expect softer consumer spending in the second half of the year, it said.

Oil prices were moderately lower during Friday morning trading on Wall Street and on track for steep weekly losses. Concerns around a slowdown in demand have sent prices tumbling in recent sessions.

West Texas Intermediate crude futures, the U.S. oil benchmark, is down 10.5% for the week, while international benchmark Brent crude has shed 14.5%.

Bitcoin, Ether on track for worst week since July 1

Cryptocurrencies have slumped this week after a rough start to the month. Bitcoin and Ether are both down about 3% week to date and on pace to post their first negative week in five.

The performance would also be the worst weekly drop since July 1, when Bitcoin lost 8.71% and Ether shed 13%.

Stifel’s Barry Bannister hiked his S&P 500 target for the second half to 4,400 from 4,200, noting he continues to prefer cyclical growth stocks in sectors such as software and media.

Here are two reasons Bannister gave for his target bump:

Earnings continue to drive individual share price movement in Europe. Allianz, Deutsche Post, the London Stock Exchange Group and WPP were among the companies reporting before the bell on Friday.

Asia markets shake off fears over military tensions around Taiwan

Markets in Asia-Pacific rose on Friday as investors shook off fears over China’s military exercises near Taiwan, which follow U.S. House Speaker Nancy Pelosi’s visit to the self-ruled island this week.

The Taiex in Taiwan jumped more than 2%, with chipmaker TSMC rising 2.8%.

Official data show Taiwan depends more on China than the U.S. when it comes to trade. Slightly more than 22% of Taiwan’s imports in 2021 were from mainland China and Hong Kong, compared with 10% from the U.S.

Taiwan is a democratic, self-ruled island, but China sees it as a renegade province.

If Friday’s jobs report shows the U.S. economy added fewer workers in July than the previous month, it is not necessarily a sign of economic weakness, according to Brad McMillan, CIO at Commonwealth Financial Network.

“If we do see a reduction in hiring, even at the expected number, it looks much more likely to be due to a shortage of workers, rather than a sudden shock to labor demand,” McMillan said in a note. “With demand strong, what matters here is labor availability.”

The Fed’s commitment to bring down inflation as well as easing recession fears have sparked a relief rally in the market. The S&P 500 is now 14.2% above its 52-week intraday low of 3,636.87 from June 17. The benchmark index is also coming off its best month since November 2020, gaining more than 9% in July.

However, some on Wall Street are skeptical that the rally can sustain for much longer. Max Kettner, chief multi-asset strategist at HSBC Bank said the comeback is “wishful thinking,” and he would need to see further repricing of rate hike expectations and another sharp drop in real yields to believe it.

Six out of the 11 S&P 500 sectors were in the green week to date, led by consumer discretionary, which has gained 2.9%.