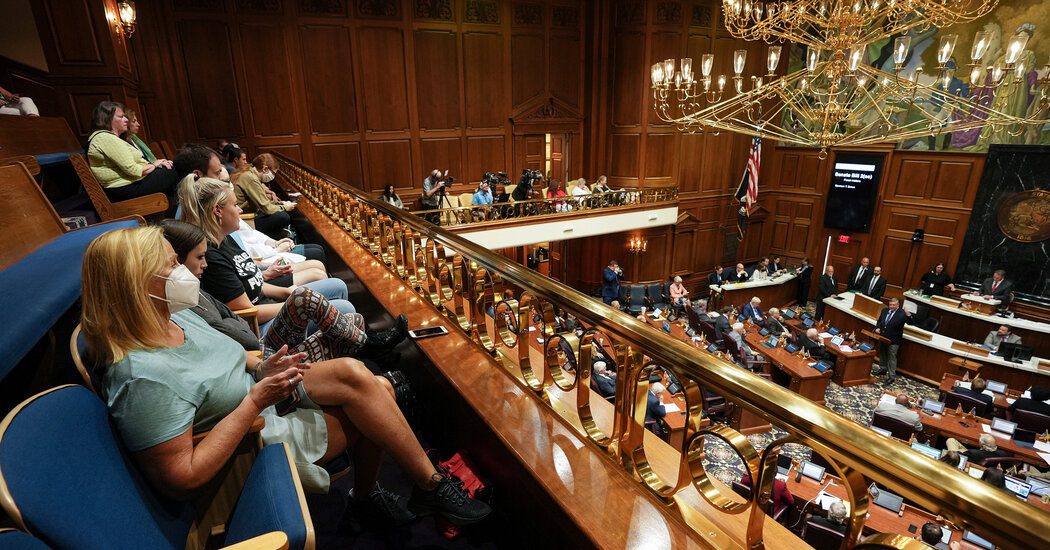 The bill was sent to the governor despite dividing Republicans. Some of them said the measure was too restrictive; others objected to limited exceptions for rape and incest.

INDIANAPOLIS — Indiana lawmakers passed a near-total ban on abortion on Friday, overcoming division among Republicans and protests from Democrats to become the first state to draw up and approve sweeping new limits on the procedure since Roe v. Wade was struck down in June.

The bill’s passage came just three days after voters in Kansas, another conservative Midwestern state, overwhelmingly rejected an amendment that would have stripped abortion rights protections from their State Constitution, a result seen nationally as a sign of unease with abortion bans. And it came despite some Indiana Republicans opposing the bill for going too far, and others voting no because of its exceptions.

The end of Roe was the culmination of decades of work by conservatives, opening the door for states to severely restrict abortion or ban it entirely. Some states prepared in advance with abortion bans that were triggered by the fall of Roe. Lawmakers in other conservative states said they would consider more restrictions.

But, at least in the first weeks since that decision, Republicans have moved slowly and have struggled to speak with a unified voice on what comes next. Lawmakers in South Carolina and West Virginia have weighed but taken no final action on proposed bans. Officials in Iowa, Florida, Nebraska and other conservative states have so far not taken legislative action. And especially in the last few weeks, some Republican politicians have recalibrated their messaging on the issue.

“West Virginia tried it, and they stepped back from the ledge. Kansas tried it, and the voters resoundingly rejected it,” State Representative Justin Moed, a Democrat from Indianapolis, said on the House floor before voting against the bill. “Why is that? Because up until now it has just been a theory. It was easy for people to say they were pro-life. It was easy to see things so black and white. But now, that theory has become reality, and the consequences of the views are more real.”

The Indiana bill — which bans abortion from conception except in some cases of rape, incest, fatal fetal abnormality or when the pregnant woman faces risk of death or certain severe health risks — now goes to Gov. Eric Holcomb, a Republican who encouraged legislators to consider new abortion limits during a special session that he called. Beyond those limited exceptions, the bill would end legal abortion in Indiana next month if it is signed by the governor. The procedure is currently allowed at up to 22 weeks of pregnancy.

“If this isn’t a government issue — protecting life — I don’t know what is,” said Representative John Young, a Republican who supported the bill. He added: “I know the exceptions are not enough for some and too much for others, but it’s a good balance.”

The bill’s passage came after two weeks of emotional testimony and bitter debates in the Statehouse. Even though Republicans hold commanding majorities in both chambers, the bill’s fate did not always seem secure. When a Senate committee considered an initial version of the bill last week, no one showed up to testify in support of it: The American Civil Liberties Union of Indiana called it a “cruel, dangerous bill,” Indiana Right to Life described it as “weak and troubling,” and a parade of residents with differing views on abortion all urged lawmakers to reject it.

The debate was supercharged by the case of a 10-year-old Ohio girl who had traveled to Indiana for an abortion after she was raped. The abortion provider in that case, Dr. Caitlin Bernard, became a target of some on the right.

Abortion rights protesters were a regular presence at the Statehouse during the session, sometimes chanting “Let us vote!” or “Church and state!” so loudly from the hallway that it could be difficult to hear lawmakers. Several Democrats invoked the vote in Kansas, in which 59 percent of voters decided to preserve abortion rights, as an example of the political risk Republicans were taking. Democrats suggested putting the issue to a nonbinding statewide vote in Indiana, which Republicans rejected.

“Judging by the results I saw in Kansas the other day,” said Representative Phil GiaQuinta, a Democrat who opposed the Indiana bill, “independents, Democrats and Republicans by their votes demonstrated what is most important to them, and me, and that is our personal freedoms and liberty.”

Todd Huston, the Republican speaker of the Indiana House, said he was pleased with the final version of the bill. But asked about the protests in Indianapolis and the vote in Kansas, he acknowledged that many disagreed.

“We’ve talked about the fact that voters have an opportunity to vote, and if they’re displeased, they’ll have that opportunity both in November and in future years,” Mr. Huston said.

Democrats warned of the consequences of passing the bill and noted the state’s status as the first to do so in a post-Roe America. Business leaders sounded their concern before its passage: The chamber of commerce in Indianapolis urged the Legislature this week not to pass the bill, saying it could threaten public health and the state’s business interests.

State Senator Eddie D. Melton, a Democrat who represents parts of northwest Indiana, spoke against the bill on the Senate floor on Friday, calling it a rushed process and a power grab.

He reminded Republicans of the resounding vote in Kansas this week in support of abortion rights, a warning to Indiana lawmakers that the party could face a backlash from voters.

“If this passes, the only referendum that’s left is in November,” he said.

Jennifer Drobac, a law professor at Indiana University Bloomington, said she was concerned about the speed at which the bill in her state was passed and the relatively short window for the public to debate its implications.

“Law made in haste is often bad law,” she said. “This highlights the fact that these guys are not anticipating how unworkable this legislation will be. This is going to impact thousands of people who get pregnant in Indiana alone.”

Divisions within the Republican Party were repeatedly on display during the session. Representative Ann Vermilion described herself as a proud Republican. But said she thought the legislation went too far, too quickly.

“The U.S. Supreme Court made the decision to move the abortion rights to the state level, which has peeled an onion on the details of abortion, showing layers and layers of such a difficult topic that I, myself, wasn’t prepared for,” Ms. Vermilion said before voting against the bill.

Other Republicans echoed the complaints voiced during public testimony by anti-abortion residents, advocacy groups and religious leaders. They questioned how lawmakers who portrayed themselves to voters as staunch abortion opponents were now forgoing an opportunity to pass a ban without exceptions for rape and incest. Some abortion opponents have argued that rape and incest, while traumatic, do not justify ending the life of a fetus that had no control over its conception.

“This bill justifies the wicked, those murdering babies, and punishes the righteous, the preborn human being,” said Representative John Jacob, a Republican who also voted against the bill. He added: “Republicans campaigned that they are pro-life. Pro-life means for life. That is not just some lives. That means all lives.”

Similar debates have played out in West Virginia, where the House of Delegates passed a bill that would ban nearly all abortions. But disagreement broke out when the Senate narrowly decided to remove criminal penalties for medical providers who perform abortion illegally, citing fears that it could worsen the state’s existing shortage of health care workers. The legislation is stalled.

Delegate Danielle Walker, a West Virginia Democrat, said she believed the abortion referendum in Kansas was a wake-up call for the more moderate contingent of Republican legislators.

Elizabeth Nash, state policy analyst at the Guttmacher Institute, which supports abortion rights, said that Indiana offered a glimpse of the dynamic that could deepen in other legislatures in the coming weeks: the difficulty in pleasing their conservative base in the face of other public opposition to abortion restrictions.

“In Indiana, the legislators are now between a rock and a hard place,” she said. “They’re between their base,” which is demanding an abortion ban with no exception, “and members of the public who are saying, ‘we support abortion access.’ You can see how the legislators, who are balancing people’s rights, are also looking at the next election.”