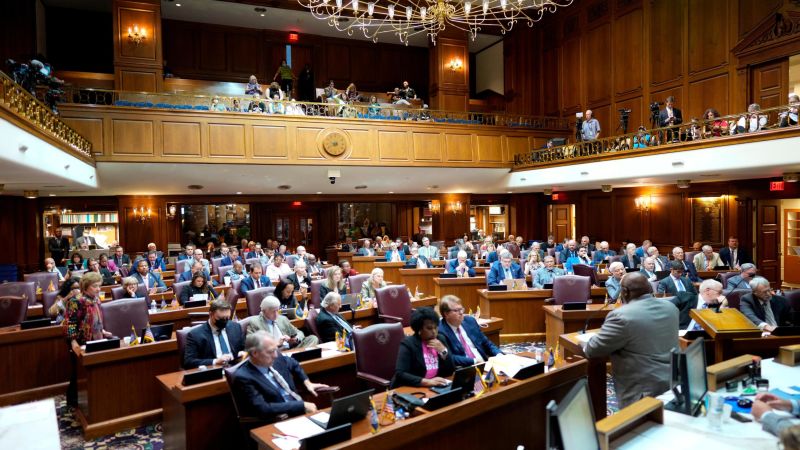 Indiana Gov. Eric Holcomb on Friday signed a bill that would ban most abortions – the first state to pass a restrictive law against the procedure since Roe v. Wade was overturned earlier this summer.

The Indiana House and Senate passed the GOP-sponsored bill earlier on Friday.

The bill would provide exceptions for when the life of the mother is at risk and for fatal fetal anomalies, up to 20 weeks post-fertilization. It would also allow exceptions for some abortions if the pregnancy was a result of rape or incest.

Indiana presently allows abortions up to 20 weeks after fertilization (or 22 weeks after the mother’s last menstrual period). The new law will go into effect on September 15.

The Supreme Court’s decision to eliminate a federal right to abortion sent the issue back to the states, and several Republican leaders have pledged to take action to curtail access to the procedure. West Virginia also has reconvened a special session, though it’s near-total abortion ban remains in limbo after the Republican-led legislature could not come to a consensus and adjourned, leaving abortion legal up until 20 weeks post-fertilization. And in Kansas, voters this week handily defeated an effort to amend the state’s constitution to remove the right to abortion.

On Thursday, the Indiana House rejected Republican-sponsored amendments that would have removed the exceptions for rape, incest and fatal fetal anomalies from the bill. Members of House Republican leadership were divided as Speaker Todd Huston and Speaker Pro Tempore Mike Karickhoff voted against the amendments, while Majority Leader Matt Lehman backed the amendments.

A House amendment also failed on Thursday that would have placed a non-binding question on the 2022 general election ballot as to whether abortion should remain legal in Indiana.

Friday’s vote in the state House followed an emotional and sometimes contentious debate during which protesters’ cheers and jeers could be heard amid lawmakers’ speeches.

GOP House Rep. John Jacob of Indianapolis, who supports a total ban on abortion, said on the House floor Friday said he would not support the bill because it “regulates abortion which is baby murder,” while calling on his colleagues to repent before God.

Democratic Rep. Renee Pack of Indianapolis later fired back at Jacob and spoke of her own abortion in 1990 when she served in the US military.

“It took me getting to this statehouse for my colleagues to call me a murderer. I had to get that kind of abuse in this room, in this chamber. Sir, I am not a murderer, and my sisters are not murderers either,” Pack said on Friday. “We are pro-choice. That is what we are. We believe that we have command over our own bodies.”

During Friday’s debate, lawmakers on both sides of the aisle lamented the time crunch they were under to consider such a difficult topic.

“We are all trying, we are all discerning, none of us are sleeping, none of all are doing well. We’re walking around with … knots in our stomach,” House Rep. Ann Vermilion, a Republican from Marion, said on the floor Friday ahead of the vote, getting emotional.

“Everyone of us, 150, have cried this week and we are all trying to do the will of the people while equally being true to our faith and our core belief,” she said.

Particular attention has placed on Indiana after a 10-year-old rape victim from Ohio crossed state lines to get an abortion in June, after Roe was overturned.

The Indiana doctor who provided abortion services for the 10-year-old girl said the Indiana abortion bill “is going to hurt Hoosier women.”

“Medicine is not about exceptions,” Dr. Caitlin Bernard told CNN’s Brianna Keilar on “New Day” earlier Friday. “I can’t even begin to tell you how many patients I see in very unique situations that can’t fit in to those exceptions, that can’t have a list of what I can and can’t do. They can’t wait to check with their lawyer, I can’t wait to check with my lawyer. I need to be able to take care of patients when and where they need that care.”