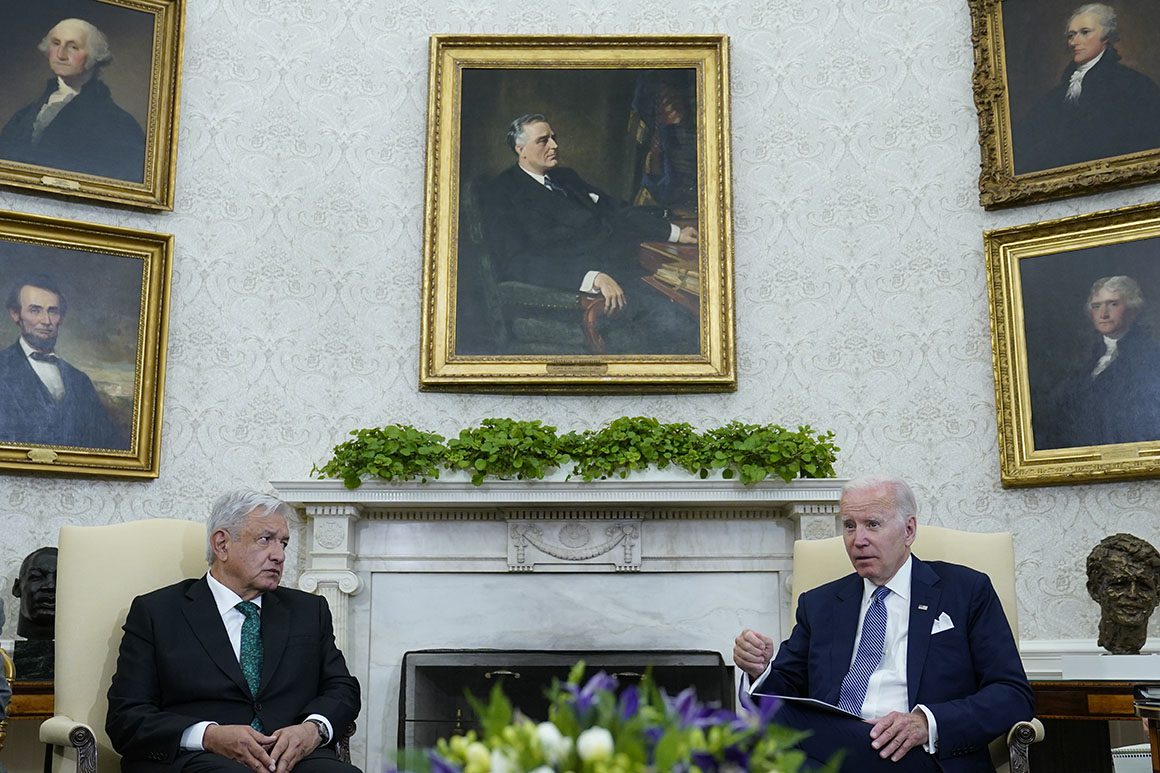 That was evident on Tuesday when López Obrador sat next to his American counterpart at the White House and spent nearly 30 minutes rattling off thinly veiled barbs over everything from U.S. immigration policy to gas prices along with “grievances that are not really easy to forget with time or with good wishes.”

Biden acknowledged many of the points López Obrador made. But he also dismissed reports about tension between the two leaders.

“You and I have a strong and productive relationship and, I would argue, a partnership,” Biden told López Obrador.

The exchange was indicative of a U.S.-Mexico relationship that remains strained — even as Biden has opted for diplomacy where his predecessor used insults and threats. During his administration, former President Donald Trump had constantly touted plans to build a border wall and threatened tariffs if Mexico didn’t work harder to stop migrants from trying to cross it. The 45th president regularly showed his disdain for America’s neighbor to the south.

That was then. Now, Biden needs López Obrador’s cooperation to tackle global inflation along with a host of other issues, including addressing the record number of migrants making the trek to the U.S. And the Mexican president seems to know it.

“López Obrador has learned after three and a half years in the presidency what he can get away with in the relationship with the U.S. that shows his distance and yet doesn’t break the relationship,” said Andrew Selee, president of the Migration Policy Institute, emphasizing close cooperation even if the “rhetoric is less warm.”

“And the reality is immigration is a very politically sensitive topic that Biden needs to deal with Mexico on,” he said. “He’s also trying to keep allies close at a time when the world order is shifting because of Russia’s invasion of Ukraine.”

López Obrador’s visit to the White House came a month after the Mexican president, known by his initials AMLO, snubbed Biden by boycotting the Summit of the Americas in Los Angeles because the U.S. did not invite the leaders of Cuba, Venezuela and Nicaragua. Several Central American leaders followed suit and did not attend the summit either.

Just last week, the Mexican leader said he would campaign to tear down the Statue of Liberty if WikiLeaks founder Julian Assange was extradited and convicted of criminal charges by U.S. authorities. He’s also previously called U.S. support for Ukraine in the war with Russia a major mistake.

On a policy level, the relationship between the two neighboring countries has gotten more complicated under Biden. Selee explained that Trump’s priority was always clear: for Mexico to stop migrants before they got to the border. Under Biden, however, the two countries have discussed a “more nuanced set of policy objectives” with Biden asking for help stopping migrants while also stressing the need for humanitarian protections and ways to tackle the pressures that force people to migrate.

Some of the concrete outcomes from the meeting included commitments to launch a working group on labor migration pathways and worker protections and establish a task force to “disrupt the flow of fentanyl into our countries,” according to a joint statement from Biden and López Obrador. The administration also touted a commitment from Mexico to invest $1.5 billion on border infrastructure over the next two years.

López Obrador, for his part, said he was happy to return to the White House, and that the U.S. could “count on our support and solidarity always.” The Mexican leader had his first face-to-face meeting with Biden in November as part of the North American Leaders’ Summit.

Biden’s approach toward Mexico — with his diplomatic tone and longer list of policy priorities — has largely differed from Trump.

Following his election in 2018, López Obrador had surprised many by forging a seemingly positive relationship with Trump, in spite of his repeated threats and criticism of Mexico. The Mexican leader went so far as to call Trump a friend. He was one of the last foreign leaders to congratulate Biden after the 2020 election.

But while Biden certainly needs López Obrador to address irregular migration, the Mexican leader needs Biden, too, note former U.S. officials and experts on the region.

“López Obrador isn’t doing us any favors. It’s in his interest, too,” said Eric Farnsworth, vice president of the think tank Council of the Americas. “It’s not a good look for Mexico that everyone is trying to leave the country. And it’s not a good look that Central Americans are traveling through Mexico unhindered to get to the U.S. What does that say about your security activities and your ability to control your territory?”

Farnsworth added that Biden is facing a balancing act in how to respond to López Obrador’s criticism, noting that both countries need to always maintain close cooperation but letting repeated slights pass sends the wrong signal to the region. Multiple diplomats throughout Latin America have taken notice of how Biden has responded to leaders who have been vocally critical of him, Farnsworth added.

It sends the message that “the best way to get the U.S.’ attention is to treat us poorly and then you’ll get an invitation to the White House,” Farnsworth said. “That’s the wrong incentive.”