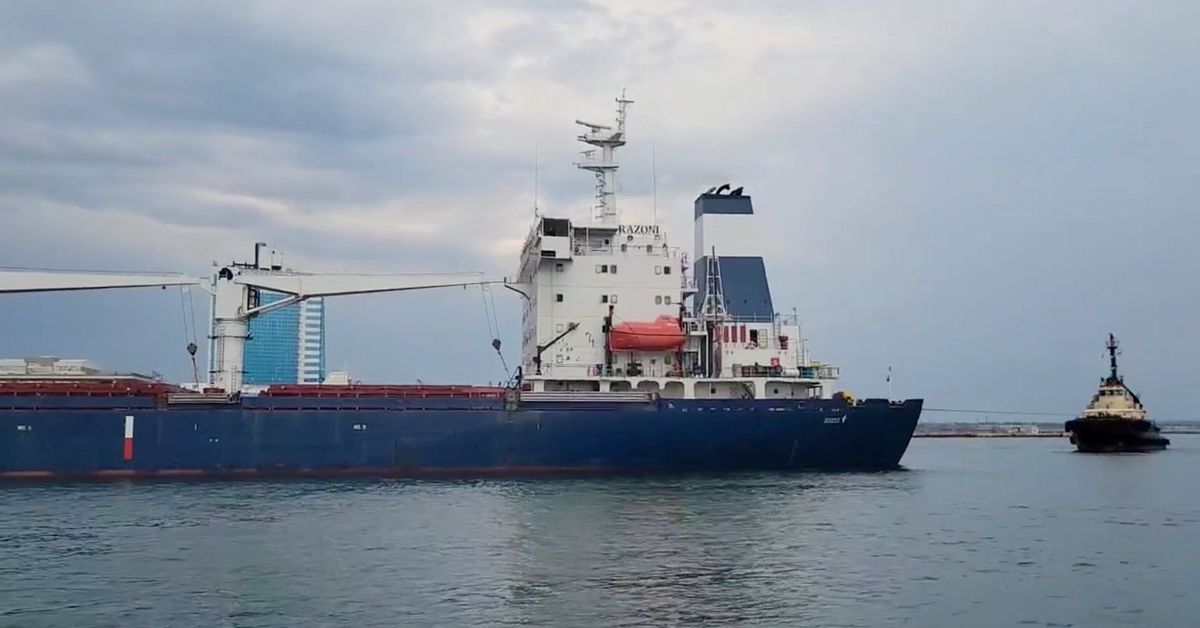 KYIV, Aug 1 (Reuters) – The first ship to carry Ukrainian grain through the Black Sea since Russia invaded Ukraine five months ago left the port of Odesa for Lebanon on Monday under a safe passage deal described as a glimmer of hope in a worsening global food crisis.

The sailing was made possible after Turkey and the United Nations brokered a grain-and-fertiliser export agreement between Russia and Ukraine last month – a rare diplomatic breakthrough in a conflict that has become a drawn-out war of attrition.

The Sierra Leone-flagged ship Razoni will head to the port of Tripoli, Lebanon, after transiting the Bosphorus Strait linking the Black Sea, which is dominated by Russia’s navy, to the Mediterranean. It is carrying 26,527 tonnes of corn.

Russia’s invasion of Ukraine on Feb. 24 has led to a worldwide food and energy crisis and the United Nations has warned of the risk of multiple famines this year.

U.N. Secretary-General Antonio Guterres said he hoped Tuesday’s departure would be the first of many such cargos and that the U.N. would charter a ship to replenish supplies of aid.

Ukrainian Foreign Minister Dmytro Kuleba called it a “day of relief for the world, especially for our friends in the Middle East, Asia, and Africa.”

Ukraine and Russia are leading world grain suppliers and between them account for nearly a third of global wheat exports. The deal aims to allow safe passage for grain shipments in and out of Odesa and nearby Chornomorsk and Pivdennyi.

Moscow has denied responsibility for the food crisis, blaming Western sanctions for slowing its exports and Ukraine for mining the approaches to its ports. The Kremlin called the Razoni’s departure “very positive” news.

Turkish Defence Minister Hulusi Akar said the vessel would anchor off Istanbul on Tuesday afternoon and be inspected by a joint team of Russian, Ukrainian, United Nations and Turkish representatives.

“It will then continue as long as no problems arise,” Akar said.

Prior to the Razon’s departure, Ukrainian presidential officials had said 17 ships were docked in Black Sea ports with almost 600,000 tonnes of cargo, mostly grain. Countries expressed hope that more would now be able to leave.

“This is a glimmer of hope in a worsening food crisis,” a German foreign ministry spokesperson told a government briefing.

France welcomed the shipment while condemning what it called “indiscriminate” Russian strikes against Ukraine, including on Odesa’s port, which it said were undermining the agreement.

A junior engineer on the vessel, Abdullah Jendi, said the crew were happy to be moving after their prolonged stay in Odesa and that he, a Syrian, had not seen his family in more than a year. read more

“It is an indescribable feeling to be returning to my home country after suffering from the siege and the dangers that we were facing due to the shelling,” he said.

He said he was scared the ship might hit a mine in the hours it would take to leave regional waters and that, in his view, no one would win the conflict, which shows no sign of resolution.

“Even the victor of war will have lost because of the human and material losses,” he said. “In my opinion, the people of Ukraine don’t deserve this because they are good and peaceful people.”

The U.S. Embassy in Kyiv also welcomed the shipping resumption and said the world would be watching out for more.

Chicago wheat and corn prices fell on Monday amid hopes that Ukraine’s cereals exports could resume on a large scale.

BOMBARDMENTS IN SOUTH AND EAST

Despite the breakthrough on the grain shipments, the war continued elsewhere.

Three civilians were killed by Russian shelling in the eastern Donetsk region – two in Bakhmut and one in nearby Soledar – in the last 24 hours, regional governor Pavlo Kyrylenko said.

An industrial city and transport hub, Bakhmut has been under Russian bombardment for the past week as the Kremlin’s forces try to occupy all of Donetsk after seizing most of the neighbouring region, Luhansk, last month.

After failing to quickly capture the capital Kyiv early in the war, Russia has been aiming to capture the eastern Donbas region, made up of Donetsk and Luhansk, and more of the south, where it annexed Crimea from Ukraine in 2014.

Ukrainian President Volodymyr Zelenskiy said Russia has been transferring some forces from the Donbas, part of which was controlled by Russian-backed separatists before the invasion, to the southern Kherson and Zaporizhizhya regions.

Ukraine, which has launched a counter-offensive in the south, has pleaded with the West to supply more long-range artillery as it tries to turn the tide in the conflict.

Moscow says Western arms supplies to Ukraine only drag out the conflict and the supply of longer-range weapons justifies Russia’s attempts to expand control over more Ukrainian territory for its own protection.

Russia invaded Ukraine in what it called a “special operation” to demilitarise its neighbour. Ukraine and Western nations have dismissed this as a baseless pretext for war.