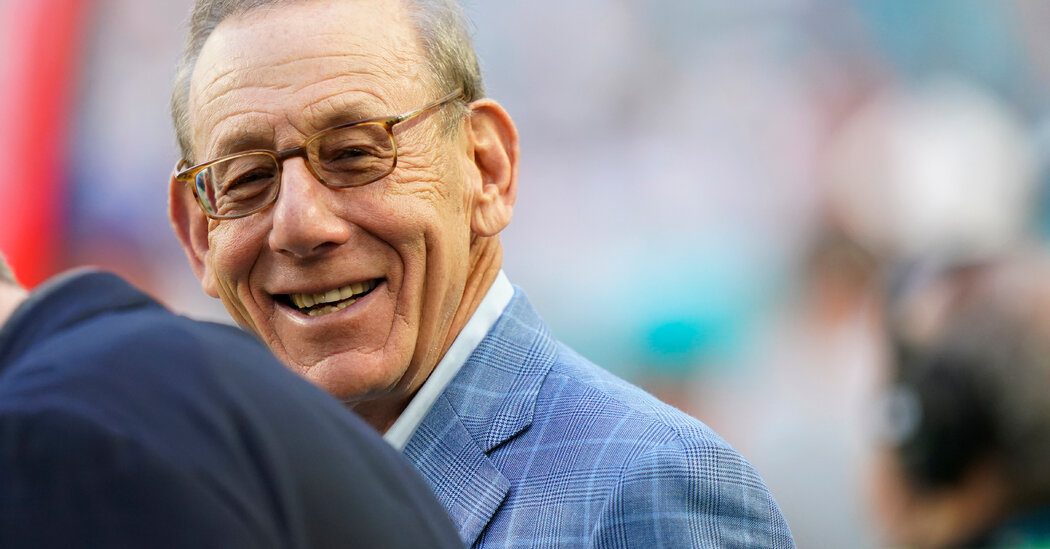 The N.F.L. has suspended the Miami Dolphins owner Stephen M. Ross and taken away two draft picks after an investigator found the team violated the league’s anti-tampering policy by trying to lure quarterback Tom Brady and the coach Sean Payton to Miami.

At the same time, the investigator, the former U.S. attorney Mary Jo White, found no evidence that Ross had ordered the team’s former coach, Brian Flores, to deliberately lose games to improve its standing in the college draft, a claim Flores made in a federal lawsuit in February, a month after the Dolphins fired him.

White determined that Ross’s offer to pay Flores $100,000 for each game the Dolphins lost — one of the most inflammatory claims in his lawsuit — “was not intended or taken to be a serious offer, nor was the subject pursued in any respect by Mr. Ross or anyone else at the club.”

As a result of the tampering charge, though, the Dolphins will forfeit their first-round draft pick in 2023 and their third-round pick in 2024. Ross will be suspended through Oct. 17. He will not be allowed at the team’s facility and may not represent the club at any team or league event. He will be removed from all league committees indefinitely and must pay a fine of $1.5 million. Ross has been on three powerful committees: media, finance and gambling.

In a statement, Roger Goodell, the commissioner of the N.F.L., said White had found tampering violations “of unprecedented scope and severity.” He added, “I know of no prior instance in which ownership was so directly involved in the violations.”

Deshaun Watson’s suspension. The quarterback, who was accused by more than two dozen women of sexual misconduct during massage treatments, was suspended for six games for violating the N.F.L.’s personal conduct policy. Two grand juries in Texas declined to criminally charge Watson, who later reached settlements in all but one of the 24 lawsuits against him. But a Times investigation showed that Watson may have engaged in more questionable behavior than previously known.

Tampering violations. The N.F.L. suspended Miami Dolphins owner Stephen M. Ross and took away two draft picks after an investigator found that the Dolphins violated the league’s anti-tampering policy by trying to lure quarterback Tom Brady and former head coach Sean Payton to Miami. At the same time, the investigator found no evidence that Ross had ordered the team’s former head coach, Brian Flores, to deliberately lose games, claims Flores made in a federal lawsuit.

A contentious partnership. The Dallas Cowboys faced criticism after announcing a new partnership with Black Rifle Coffee, the veteran-owned brand popular with conservatives and gun owners that sells roasts with names like “AK Espresso,” “Murdered Out” and “Silencer Smooth.” The announcement drew criticism in part for its timing, a day after a deadly mass shooting in Highland Park, Ill.

Jon Gruden’s lawsuit. In 2021, Gruden stepped down as head coach of the Las Vegas Raiders after The Times reported on emails in which he made homophobic, misogynistic and racist remarks. He later filed a lawsuit against the league, claiming that it had intentionally leaked the emails and sought to destroy his career. In May 2022, a judge denied the league’s motions to dismiss the suit and to compel a closed-door arbitration.

The findings came after a six-month investigation that began after Flores filed his suit. It included allegations that the league and its teams had organized sham interviews with Flores and other coaches of color to skirt the rules requiring teams to interview a diverse set of candidates for top job openings.

Flores cited text messages from New England Patriots Coach Bill Belichick, who appeared to congratulate Flores for getting the Giants’ coaching job, for which he had yet to interview. Flores responded by asking if Belichick had intended the message for another Brian — Brian Daboll — and Belichick acknowledged he had. Daboll, who is white, got the position with the Giants, leading Flores to conclude that the Giants had made their decision before Flores had even been interviewed.

Flores’s suit, which is still pending, also included allegations against Ross, who fired Flores after the 2021 season after three years as the Dolphins’ head coach. Flores claimed Ross tried to bribe him to lose games and skirted the league’s prohibition on speaking to other players and coaches under contract without the permission of their teams.

The league found that the Dolphins had impermissible communications with Brady during the 2019 season and postseason, while he was playing for the Patriots. Those communications were said to be “numerous and detailed.” The Dolphins were found to again have had improper contact with Brady and his agent in the 2021 season, while he was playing for the Tampa Bay Buccaneers, including discussions of Brady’s becoming a partner in the Dolphins.

The Dolphins were also found to have improperly tried to lure Payton to be coach of the team in January while he was still coach of the New Orleans Saints.

“With regards to tampering, I strongly disagree with the conclusions and the punishment,” Ross said in a statement. “However, I will accept the outcome because the most important thing is that there be no distractions for our team as we begin an exciting and winning season.”

Numerous owners have been fined over the years by the N.F.L., although suspensions are less common. Among them were Edward J. DeBartolo Jr. of the San Francisco 49ers, who was suspended for the 1999 season after pleading guilty to a felony tied to riverboat casino licenses in Louisiana, and Jim Irsay of the Indianapolis Colts, who was suspended for six games in 2014 after a guilty plea to impaired driving.

Last year, the N.F.L. fined the Washington Football Team $10 million after an investigation of a club culture of sexual harassment. The owner, Daniel Snyder, removed himself from day-to-day business operations of the club through mid-October.