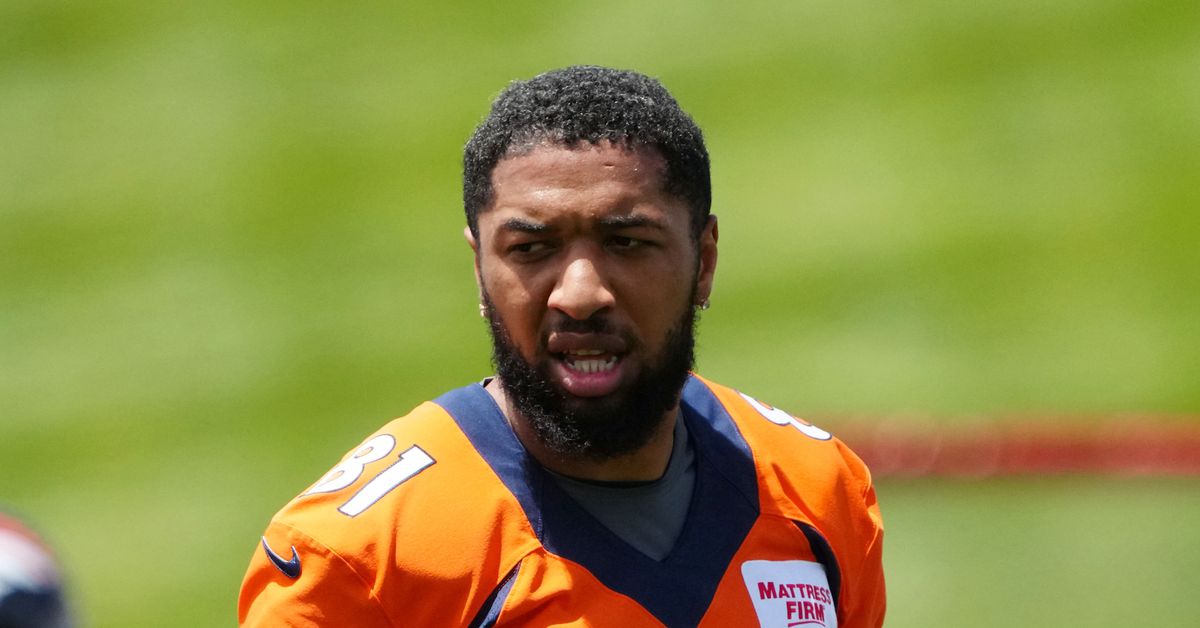 The Denver Broncos had their first fully padded practice of training camp on Tuesday. However, that excitement soon turned to dread as a couple of non-contact injuries turned the collective mood sour.

There were some positives that came from the practice sessions overall, though, so let’s get down to business.

But first, the top story of the day is obviously the injury one. The first guy to go down was running back Damarea Crockett, but he was soon followed by wide receiver Tim Patrick. MRI’s later confirmed both had torn their ACL’s and would be out for the remainder of the 2022 season.

Before these results were confirmed, head coach Nathaniel Hackett was asked who stepped up in Patrick’s absence.

“You see the tape and get a little better evaluation. You know ‘12’ [Montrell Washington] made a couple of good plays. Jerry [Jeudy] did some things. I mean, all those guys are going to have to rally together. That’s part of this game. The worst part of this game is when things like that happen, but it also brings your team together. You have to show the support and love for your family because they are a part of our family. We have to find a way to fill that void.”

Patrick figured to be a very important piece on that offense with he and Courtland Sutton being the big men outside. Hackett and his offensive coaching staff will need to continue to evaluate the play calling to ensure they scheme in a way that best fits the players they have.

One of those players is rookie Montrell Washington. It seems we are mentioning this kid every single day and he just keeps impressing. We’ve all heard that Washington has speed, but it was Andrew Mason of 104.3 The Fan who noted the factor that should impress the most. His hands.

Russell Wilson loves to go deep with the football, so if Washington is able to consistently get behind the defense then he’ll quickly become one of Wilson’s favorite targets in 2022.

Coach Hackett loves Washington’s work ethic. It’s that work ethic that has catapulted him into pushing for playing time as one of Wilson’s favorite targets in camp so far.

“He has worked so hard. I don’t think anybody really knew where he was going to put himself within the wide receiver rotation. He is a guy that Russell [Wilson] has latched on to and really tried to push with the rookies being around here. [He’s] just try to grow because it is so different, coming from where he’s been. He’s grasping a lot and he’s made a bunch of good plays around here. He had a great play to Tyreik [McAllister] in there. We’re excited. He’s going to have to step up.”

Camp stud of the day is probably Montrell Washington.

Great over the shoulder catch. Beautiful tracking of an underthrown ball despite two steps on DB.

Keep on eye on Montrell Washington. That’s the daily reminder.

Aside from that, however, the defense continued to get the best of the offense consistently. Hackett again spoke on this issue and noted that the first-team offense didn’t get it done today.

“We didn’t get a score in those, and we need to do better. We just need to take a look at what they are doing and get some easy completions in those situations at the end of the half to move the chains and get that first fist down like they did on the first one. For us, it’s always about that operation. We want to make sure the operation is going to be fluid. It’s always a little different in the game, but you just want to continue to get the guys pushing and going fast.”

Defense is winning against the starting offense so far. Great coverage everywhere. Came close to a completion on a deep out to Sutton against Darby but it was a tight window and Sutton couldn’t quite get to it.

Kareem Jackson credits the addition of quarterback Russell Wilson to the defenses intensity and play here in the first six days of training camp practices.

“I think we’re doing good. Any time you get to see guy like that (QB Russell Wilson) every day, it’s a luxury for us as a secondary. Having the chance to go against him, it’s definitely making us better. It’s all about communication and making sure we’re on the same page. Just realizing the different things they’re throwing at us. There are other things you just have to react to. If we’re all on the same page before the ball snaps, I think we have a pretty good chance of being successful against anybody.”

Pairing a great defense with a great offense would definitely make this Broncos’ fan happy.

We have a punting competition

I had written off the punting situation as Sam Martin’s job, but Corliss Waitman came out with a big day punting. The flurry of activity on twitter feeds began with Martin having one of his punts blocked.

Waitman then boomed a few punts that dropped deep in favorite field position. The mile high air carried his punt for over five seconds and dropped right out of bounds where it needed to be.

According to Zach Segars of Mile High Sports, most of the best punts of the day have come from Waitman. This is a battle now worth paying attention to as training camp progresses.

Melvin Gordon getting the first carry of the day. That’s notable.

Russel Wilson hits Courtland Sutton on a 10-yard slant throwing off his back foot. Good coverage by Darby, but Wilson hit Sutton in the tight window.

Essang Bassey did a nice job setting the edge against a toss. He’s playing the K’Waun Williams role.

Dre’Mont Jones had a “sack” on Russell Wilson. He’s getting pressure on the offensive line.

Damarri Mathis is having another really good day. Something coverage on multiple different routes today.

Brett Rypien deep left to Montrell Washington for the TD

Russell Wilson was justttt off with Jerry Jeudy 40 yards down the field. The ball hit Jeudy’s finger tip but wasn’t able to pull in the pass. Darby and Simmons in coverage.

Nik Bonitto and Baron Browning with a sack on Brett Rypien. Both burned off the edge.

With one second left, and the ball on the goal line, Brett Rypien finds Montrell Washington for the TOUCHDOWN to end practice.

Montrell celebrated with a standing backflip.

“First and foremost, both of those guys have been working so hard. A guy like Tim, who is such an amazing leader and that has done everything we’ve asked, it breaks your heart because you love him. On the flip side, it gives somebody else an opportunity to really grow and become a great player because that’s what we’re going to need. Whenever you have these things happen, it’s about supporting the man because we are about the entire team, but then at the same time, flipping it out and going, ‘Hey, now everybody has to pick it up and somebody has to show up.’”

“[CB] Pat [Surtain II] is having a great camp thus far. It’s him just recognizing things a lot more with our receiver splits, and just recognizing the different routes he’ll get from the splits. He understands things like that from receivers. Also, [he understands] formation recognition and things like that. He’s been working since Day 1, and he’s been getting better each and every day. For me, I’m always excited to come in and see what step he’ll take next. He never disappoints with that. It’s a privilege to have a guy like that out at corner because as a safety, you really don’t have to worry about him much. He’s been great.”

“I think we’re doing good. Any time you get to see guy like that (QB Russell Wilson) every day, it’s a luxury for us as a secondary. Having the chance to go against him, it’s definitely making us better. It’s all about communication and making sure we’re on the same page. Just realizing the different things they’re throwing at us. There are other things you just have to react to. If we’re all on the same page before the ball snaps, I think we have a pretty good chance of being successful against anybody.”

“I think you can see it as early as camp, but you still won’t know until you get into the season and start to play some real games. Right now, we’re just running around, even though we are in full pads. We’re still not tackling or anything like that. You can kind of see flashes of it here and there. On paper, I think we have what it takes. It’s all up to us to come in day in and day out and put the work in. I think we have a good group of leaders mixed with a core of young guys and guys that have been playing for a while. I think we have the right guys in the locker room. We just have to be willing to come out each and every day and put that work in and be consistent about what we do in order to be successful and make that playoff run.”

“1,000 percent. I think that is speaks volumes. I think our team as a whole—we’ve all become really tight, and everyone cares so much about each other. Tim is such an impactful [person] for this team—a leader, and a vet. He’s the type of vet you want to mold your young guys after. Like I said, this guy does everything that he needs to do to make sure he’s prepared for practice and prepared for the games. Going into meetings, he’s that guy that does things you want your young guys to mold themselves after. Like you said, it speaks volumes that everyone wanted to go over there to make sure he was okay. Guys were over there praying for him; guys were over there telling him to keep his head up and be positive. [I’m] just continuing to hope for the best in that situation.”

“Yeah. I’m continuing to push myself and continuing to—like we talked about at the media day, iron sharpens iron. The defense is battling with us, and they’ve been winning some reps. The offense and myself are continuing to push back at those guys because at the end of the day, if we’re not battling and if it’s super one-sided, then I guess you could say there’s a problem. When there’s a constant battle out there and the defense gets their wins and we get our wins, it’s continuing to allow us to go out there and compete. It’s so fun to be able to go into the team meetings and hear how animated the defense and offense gets at who won the day. It’s good competition and brings good energy because guys are coming out and competing at their best every day. That’s all we can ask is for the guys to show up and continue to battle every single day. It’s only going to make us better at the end of the day.”