The Justice Department has charged the suspect with 26 counts of hate crimes and weapons violations. Some charges could carry the death penalty.

A month after a massacre at a Buffalo supermarket left 10 Black residents dead, federal prosecutors charged the accused gunman with 26 counts of hate crimes and weapons violations on Wednesday.

Some of the federal charges could carry the death penalty if the Justice Department decided to seek it, though there is currently a moratorium on federal executions.

The news of the criminal complaint — which contained new evidence of the suspect’s racist hatred and his commitment to planning an attack that would kill as many Black people as possible — came as Attorney General Merrick Garland traveled to Buffalo on Wednesday to visit the site of the massacre.

In a news conference on Wednesday, Mr. Garland did not rule out seeking the death penalty in the case. “The Justice Department has a series of procedures it follows,” he said, adding: “The families and the survivors would be consulted.”

The suspect, Payton Gendron, 18, is an avowed white supremacist who wore body armor and carried a semiautomatic rifle while livestreaming the attack online. In the days before the attack, he also posted a lengthy rant outlining his belief in so-called replacement theory, a belief rooted in white supremacy that posits a scheme to “replace” white people with people of color.

All told, 13 people were shot at the Tops on the afternoon of May 14; three survived.

In the complaint filed Wednesday, an F.B.I. agent said that the suspect’s motive was “to prevent Black people from replacing white people and eliminating the white race, and to inspire others to commit similar attacks.”

Authorities have previously said that he had elaborately planned his massacre, traveling more than 200 miles from his home in Conklin, N.Y., after choosing the East Side neighborhood in Buffalo because of its large number of Black residents. He is also believed to have written a series of private posts about his plans on Discord, a messaging platform, that he made public shortly before the attack and that were rife with racist ramblings.

Prosecutors decided to file the charges in the hours after the attack, but waited to do so until after local prosecutors had announced their charges and the F.B.I. had completed its investigation, according to officials involved in the probe.

Investigators have previously said that the accused gunman visited the Tops market before the attack to do reconnaissance, but the federal complaint contained new details, including a March 8 visit in which he “created two sketches of the interior layout” of the supermarket and counted the number of Black people inside and outside the store, including cashiers and two Black security guards. A day before the attack, he returned and loitered both inside and outside the store.

Finally, on the day of the attack, federal prosecutors say, he visited just hours before the shooting began and “observed a ‘healthy amount of old and young’ Black people in the store.”

The federal complaint offered other insights into the suspect’s state-of-mind and preparations, such as a handwritten note he left in his bedroom on the morning of the shooting, in which he wrote that he “had to commit this attack” because he cares “for the future of the White race.”

The federal charges include 10 counts each of hate crimes and use of firearms to commit murder, one for each of the people killed in the attack.

In addition, Trini E. Ross, the United States Attorney for the Western District of New York, charged the suspect with three counts of hate crime and gun charges associated with the three people who were injured but not killed in the rampage.

The hate crime charges carry the possibility of a death penalty, which would be determined on the basis of deliberations by a panel of Justice Department officials. But while Ms. Ross said during a news conference in the days after the killing that the death penalty was “on the table,” the department has imposed an indefinite moratorium on the use of the death penalty.

Mr. Garland, since taking office last year, has not authorized any local U.S. attorney to pursue the death penalty against a defendant convicted in an eligible case, the Justice Department said Wednesday.

Mr. Garland’s visit came two weeks after the suspect’s indictment on 25 counts of murder and other state charges, including a charge of domestic terrorism motivated by hate — believed to be the first time that the 2020 law has been leveled against a defendant.

Mr. Gendron has pleaded not guilty to those charges and is being held without bail.

The attack at Tops, and an even more deadly massacre at an elementary school in Uvalde, Texas, has already impacted both policy and politics in New York, including the passage of a series of new state laws meant to tighten restrictions on gun ownership, including raising the minimum age to buy a semiautomatic rifle to 21. Gov. Kathy Hochul, a Democrat, also issued a pair of executive orders, including one to enhance monitoring of online extremism by the State Police.

The mass shooting in Buffalo also led Representative Chris Jacobs, a Republican who represents some of the city’s suburbs, to embrace a series of gun control measures, prompting a furious blowback from members of his own party. As a response, Mr. Jacobs said he would not run for a new term in November, decrying many Republicans’ unblinking opposition to any gun control.

On Sunday, Senate leaders in Washington said they had reached a framework for a bipartisan deal on a series of modest reforms, including enhanced background checks for prospective gun buyers under the age of 21 and funding for so-called red-flag laws that allow authorities to confiscate guns from people deemed to be dangerous to themselves or others. 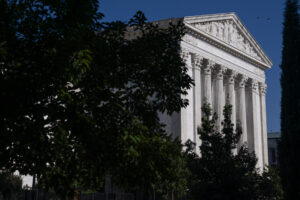