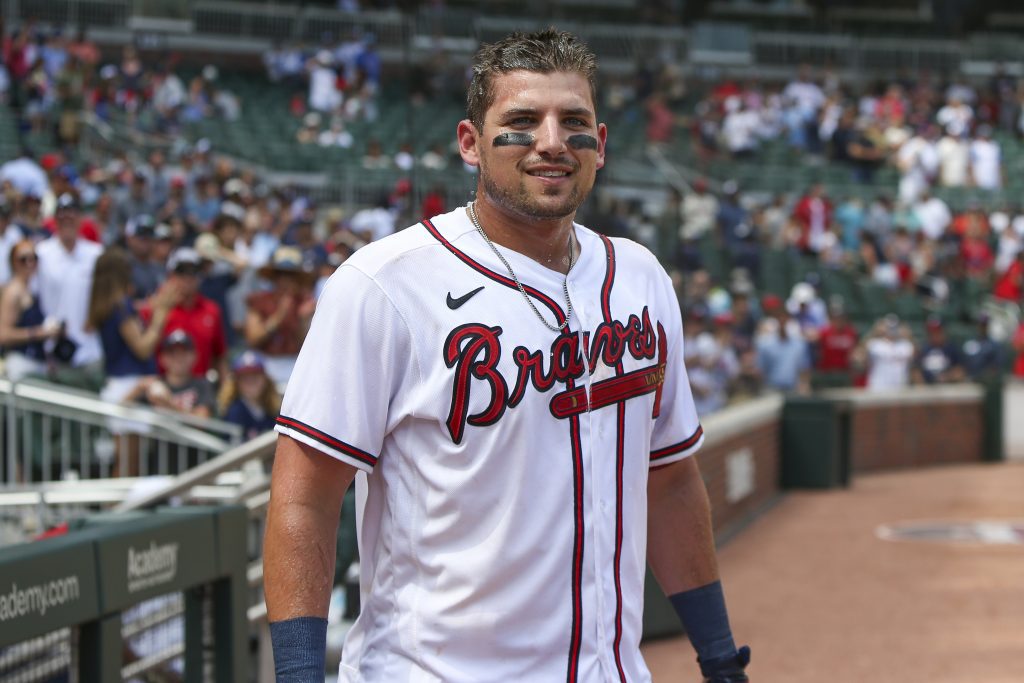 The Braves announced they’ve signed star third baseman Austin Riley to a ten-year, $212MM contract extension. Riley will make $15MM next season, $21MM in 2024, then $22MM annually through 2032. The deal also contains a 2033 club option valued at $20MM. Riley is a client of ALIGND Sports Agency.

It’s a stunning, out-of-the-blue development that keeps a franchise pillar around for the long haul. The deal buys out the 25-year-old’s final three seasons of arbitration eligibility and extends the club’s window of control by as much as eight years. It locks him in Atlanta for virtually the entirety of his prime, as Riley won’t hit free agency until after his age-35 campaign at the earliest.

A former supplemental first-round pick, Riley quickly blossomed into one of the organization’s top prospects. He reached the majors not long after his 22nd birthday in 2019. Riley was up-and-down for the first couple seasons of his big league career, particularly when he struck out in over 36% of his plate appearances as a rookie. Atlanta stuck with him despite that early inconsistency, however, and they’ve been rewarded since Riley broke out last year.

Riley appeared in 160 games last season, blasting 33 home runs with a .303/.367/.531 line. That marks a career-high in longballs to date, but that marker won’t remain his personal best much longer. He’s already connected on 29 homers in 436 plate appearances this season, and he’s hitting .301/.360/.604 altogether. Riley’s pure slash line isn’t much changed from 2021 to ’22, but his slight improvement in bottom line results comes at a time when the league-wide offense has plummeted this year. By measure of wRC+, Riley’s offensive output has jumped from an already excellent 35 points above average to an eye-popping 63 points above average.

Among qualified hitters, only Yordan Álvarez, Aaron Judge, Paul Goldschmidt, Rafael Devers and Mike Trout have a better wRC+ this season than Riley. That’s reinforced by batted ball metrics than place Riley among the game’s elite bats. His 93.7 MPH average exit velocity is more than five MPH above the league average. His 55.9% hard contact rate is also among the league’s best, as is his 17.6% barrel rate. Simply put, few batters hit the ball as hard as Riley does frequently.

Of course, Riley’s power has never really been in question. His issue earlier in his career was in making contact frequently, but the Mississippi native has made incredible strides in that regard. After making contact on only 63% of his swings as a rookie, Riley has gotten the bat on the ball around 73% of the time in each of the last three seasons. That’s not great, but it’s more than sufficient for a player with his power production. Riley still has an aggressive approach and goes out of the strike zone a fair amount, but his excellent batted ball results make up for what may always be a slightly lower than average walk rate.

Going back to the start of 2021, Riley owns a .302/.364/.560 slash in just under 1100 plate appearances. He looks like a bona fide slugger, and the Braves are surely happy to lock him into the middle of the lineup for the next decade. Riley earned a Silver Slugger Award and finished seventh in NL MVP voting last year, and he picked up his first of what the club envisions to be many All-Star nods this season.

The Braves have now committed to 75% of their infield over the long-term. Atlanta signed Matt Olson to an eight-year, $168MM deal within days of acquiring him from the Athletics in Spring Training. They’d previously had Ozzie Albies signed affordably through 2025 (with club options for 2026 and ’27). That leaves Dansby Swanson as the lone member of the Atlanta infield not under contract for the foreseeable future, as the shortstop is set to hit free agency at the end of this year.

Atlanta also has Ronald Acuña Jr. under contract for the bulk of the decade, giving them a young position player core around which to build. In the estimation of Jason Martinez of Roster Resource, the club’s 2023 payroll jumps to around $113MM for next season (not including salaries for arbitration-eligible players). They’re around $87MM for 2024 and between $60MM and $70MM for the following two years. Atlanta’s 2022 payroll, according to Cot’s Baseball Contracts, is a franchise-record $177.7MMM. That should leave them some flexibility to re-sign or replace Swanson, particularly since key contributors like Michael Harris II, Kyle Wright, Spencer Strider and Ian Anderson won’t reach arbitration until at least 2024. It’s a strong long-term position for president of baseball operations Alex Anthopoulos and his staff as they look to build off last year’s World Series title and construct a long-term juggernaut.