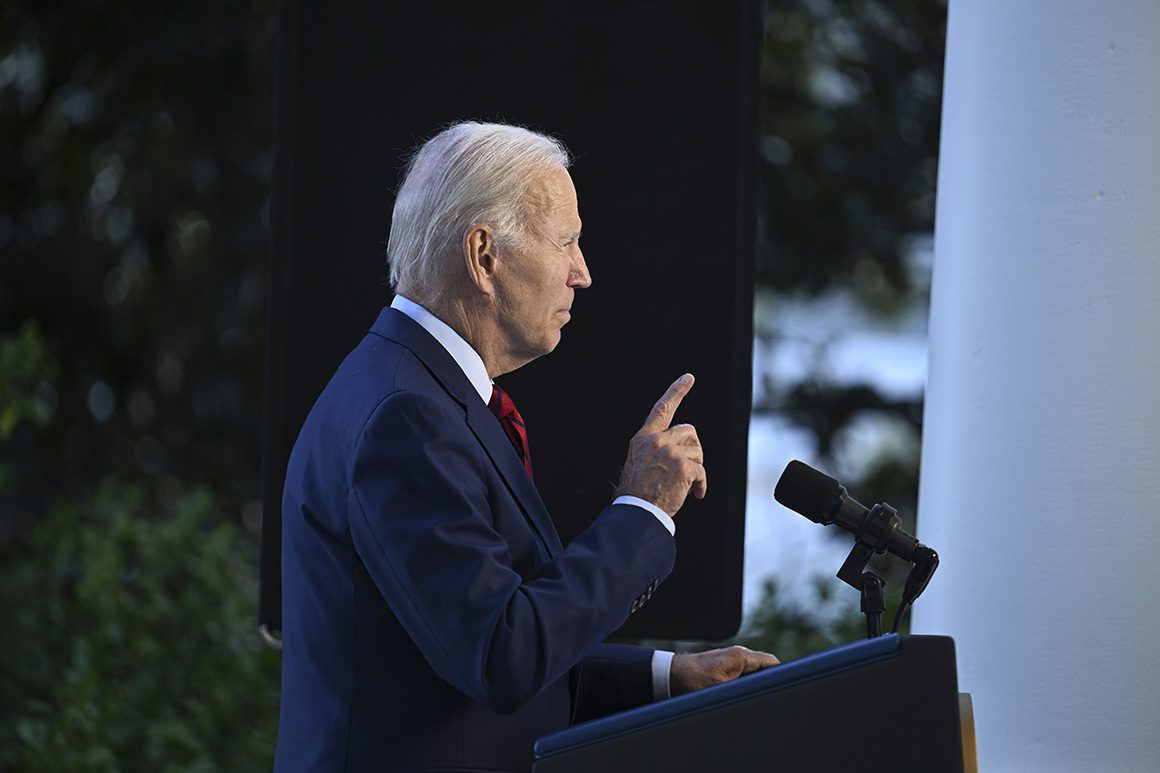 President Joe Biden speaks from the Blue Room Balcony of the White House on Aug. 1, 2022, in Washington, D.C. | Jim Watson/Pool

Nearly 12 months later, another strike in Kabul marks, what the White House hopes will be, a turning of the page on the presidency’s darkest day — one that could aid a potential Biden revival.

Standing on the White House balcony on Monday evening, Biden announced that a Hellfire missile drone strike in Kabul killed Ayman al-Zawahri, the leader of al Qaeda who was at Osama bin Laden’s right hand when the terror group struck on Sept. 11, 2001. It was the most successful counterterrorism mission ever carried out in Afghanistan, ordered by a president who ignored bipartisan criticism last year to insist it was time for the United States to end its mission in the war-torn nation.

Isolating after being infected with Covid, Biden’s voice was quiet and hoarse when he addressed the nation, speaking outside with the press pool kept at a distance to reduce the risk of transmission.

“We make it clear again tonight,” Biden said, “that no matter how long it takes, no matter where you hide, if you are a threat to our people, the United States will find you and take you out.”

The Hellfire drone doesn’t explode, but rather uses lethal blades to slice through metal and walls — and terrorists — to eliminate targets without much additional damage. The one that took out Zawahri bookended nearly a year of tumult in Afghanistan which began when a suicide bomber at Kabul’s airport killed those 13 U.S. service members and 170 Afghan civilians.

That bombing punctuated the disastrous early days of America’s military withdrawal from that nation after 20 years of war. The chaotic exit left a powerful vacuum that dangerous, repressive forces have filled: Zawahri appears to have been given safe harbor in downtown Kabul by the Taliban; thousands of Afghans who aided the Western coalition remain trapped there; personal liberties have been taken away yet again from women and girls in the nation.

But for the administration, the weekend drone strike bolstered its case that its over-the-horizon strategy — meaning that terror threats could be snuffed out in Afghanistan without a significant military presence there — was working. Aides argued that it validated Biden’s decision against asking another American family to sacrifice a loved one in the distant, mountainous land.

The operation was among the most significant counterterrorism successes since Navy SEAL Team Six stormed bin Laden’s Pakistan compound in 2011. It comes at a moment when Biden appears poised to arrest and perhaps reverse his slumping political fortunes.

In the last week, Biden’s White House has watched key Democrats agree to a surprise, stunning reconciliation package that could jumpstart the party’s chances this fall. Additionally, a bipartisan deal was reached to pass a massive economic program to bolster the nation’s ability to manufacture computer chips in order to compete with China. And the president may soon be able to sign a bill granting additional benefits to veterans exposed to toxic burn pits.

The Zawahri operation also carried an air of vindication for Biden, who as vice president 11 years ago famously expressed reluctance about the Abbottabad raid that ended bin Laden’s reign. Biden has insisted that he supported the raid but felt more time was needed to ensure its success. His position, nevertheless, has dogged him for years, including during his run for the presidency.

Richard Haass, president of the Council on Foreign Relations and senior aide in George W. Bush’s State Department, warned against deeming the Zawahri strike a “decisive blow” in the battle against terror — because al Qaeda, already diminished, would soon have a new leader. But he also made clear that Biden had notched the type of moment that eluded him when he was vice president. It was, Haass said, “an important day.”

“It disrupts one of the most important terror networks in the world,” said Haass. “It sends an important message that the United States has enormous reach, that we don’t need to have an on-the-ground presence.”

For all the celebration on Monday evening, the strike still highlighted worrisome developments in one of the world’s most dangerous countries.

Zawahri’s presence in a tony Kabul neighborhood, under the very nose of the Taliban, underscored how the new government in Afghanistan seems willing to allow terrorists to live and work out in the open. It would be, as Secretary of State Antony Blinken said Monday, a “gross” violation of the Doha Agreement between the U.S. and the Taliban, which pledged it would not allow the country to become a safe haven for terrorism. And it raised fresh fears that the soil could once again be used as a base to plot an attack on the West.

“What unnerves me is that Al-Zawahri felt comfortable enough being out in the open in the Kabul area after the Taliban takeover,” said Sen. Lindsey Graham (R-S.C.), a fierce critic of Biden’s decision to withdraw. “So much for the Taliban rejecting al-Qaida. This is proof positive that Afghanistan has once again become a safe haven for international terrorists.”

The deal to remove American troops was struck by President Donald Trump in 2020 but it also was a long-held Biden belief. As vice president, he counseled against President Barack Obama’s troop surges in Afghanistan and, during his White House campaign, committed to withdrawing the military.

With stunning speed, the Taliban recaptured outer provinces and then moved its way to Kabul. The Afghan government collapsed, President Ashraf Ghani fled the country and the Afghan national security forces put up little resistance and many laid down their arms to join the Taliban. Republicans overwhelmingly criticized Biden and he found few vocal backers among fellow Democrats.

Thousands of Afghan citizens, many of whom worked as translators and other aides to American troops, fled to the Kabul airport, desperate to escape the Taliban. In heartbreaking footage, some tried to desperately board a U.S. military plane flying to safety, dashing alongside as it raced down the runway. A few managed to cling to the plane before it took off and video showed several falling through the air as the airplane rapidly gained altitude over the city.

The suicide bomb detonated Aug. 26. Biden addressed the calamity in a national address but he did not waver in his commitment to the evacuation. Over the next several weeks, the U.S. safely evacuated thousands but scores of Afghans who worked as interpreters or helped the Americans in other ways were left to fend for themselves against the Taliban.

Last year’s foreign policy failure hung heavy over the White House. It was twinned with a rise in the pandemic’s Delta variant, sending Covid deaths soaring, and knocked the West Wing off its stride. In the months that followed, the loss side of the ledger grew crowded, with the failures of the president’s Build Back Better initiative and voting rights legislation; the Supreme Court overturning Roe v. Wade; the rise of the Omicron variant, surging inflation and more.

Biden’s poll numbers went into a freefall and several Democrats began openly questioning whether he should seek reelection. But in recent weeks, signs of a turnaround emerged: gas prices have begun to fall, gun safety legislation passed, infrastructure investments have begun, Ukraine has held off Russia. And perhaps most potent politically, a sweeping Democrats-only reconciliation package is on the precipice of passing, giving the party an important midterm win and potentially reframing voters’ view of the Biden White House.

“Especially given the nation’s climate of gridlock and polarization, this has been — assuming reconciliation passes — a great stretch for him and he can point to a lot of big things he got done over the past two years,” said Julian Zelizer, presidential historian at Princeton University.

“Now, the economy still looms large in voters’ minds and success on the policy front doesn’t always translate in the midterms,” Zelizer continued. “But even if it doesn’t help now, these are types of victories that could strongly undergird a possible 2024 campaign.”